The AMS HA mle 72, more commonly referred to as the AMS-72, is a large helicopter gunship, attack helicopter and low-capacity transport helicopter of Yonderian origin with room for eight passengers. Pilots of the Yonderian Defence Force have been know to refer to it as the "flying tank" (Burgoignesc: Char de l'Air) for its resilience and combat capability. It has been used by the Yonderian Defence Force since 1972 in a wide variety of roles and modernized models continue to see service to this day. 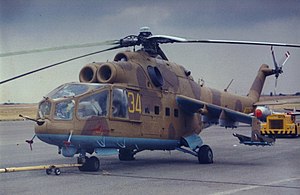 The AMS-72 was developed by the Atelier de Mechanique de Somua over a period spanning from 1964-1972. It was developed as a bid to fill the Army Procurement Command's competition for a new multi-purpose attack helicopter. The competition's doctrinal requirements called for a helicopter that would be able to function as an effective weapons platform, an attack helicopter and even as a troop carrier. FNC and AMG both entered the competition alongside AMS, but both gave up relatively early in the project, with FNC filing a formal complaint to the Yonderian Defence Force for setting unrealistic targets. Engineers at AMS kept working however, and their prototype had its first flight in September of 1969.

Thrilled by the prototype, the Army Procurement Command funded the AMS handsomely to finish development of the AMS-72. Changes made in the design addressed structural strength, fatigue problems and reduced vibration levels. The final prototype was greenlit for service in early 1972 and introduced as AMS Hélicoptère d'Attaque modéle 1972, or simply AMS-72.

View of the AMS-72's passenger compartment

The AMS-72 is a rotary aircraft with two top-mounted turboshaft engines driving a mid-mounted 17.3 m five-blade main rotor and a three-blade tail rotor. The AMS-72 has a stub wing on either side of the fuselage that functions as hardpoint mounts for weapon systems that include anti-tank guided missiles, air-to-air missiles, rocket pods and bombs. The AMS-72 fuselage is armored and can resist impacts from 12.7 mm (0.50 in) rounds from all angles. The titanium rotor blades are resistant to 12.7 mm rounds. The cockpit is titanium-armored and protected by ballistic-resistant windscreens. The cockpit and crew compartment are overpressurized to protect the crew in NBC conditions.

Passengers enter and exit by doors in either side of the fuselage. The doors open vertically and are split along the middle horizontally. Four passengers fit on either side of the AMS-72's cabin and are seated on benches that fold up and out of the way when not in use. The cabin usually also contains spare ammunition and supplies for the dismounts.

Considerable attention was given to making the AMS-72 fast. The airframe was streamlined, and fitted with retractable tricycle undercarriage landing gear to reduce drag. At high speed, the wings provide considerable lift (up to a quarter of total lift). The main rotor was tilted 2.5° to the right from the fuselage to compensate for translating tendency at a hover. The landing gear was also tilted to the left so that the rotor would still be level when the aircraft was on the ground, making the rest of the airframe tilt to the left. The tail was also asymmetrical to give a side force at speed, thus unloading the tail rotor 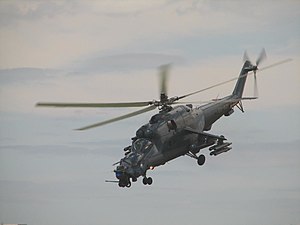 The AMS-72 was used extensively in all aspects of Operation Mission Shield. AMS-72s were used by the Yonderian Defence Force to extract Yonderre's consulate staff from Khurnwah. AMS-72s were also used to transport DELTA squads in and out of areas of operation. An AMS-72 was shot down over Algoquona on December 28th 2036, killing both pilots and leaving a squad of DELTAs deep behind enemy lines and with no means of returning. They were eventually rescued by another AMS-72 after three days in the wilderness and heavy combat with local militias.

The Yonderian contingency of AMS-72 helicopters operating in Algoquona increased from 10 to 24 with the arrival of two Sentinelle-class helicopter carriers for the punitive actions of Operation Western Blizzard carried out by the Yonderian Defence Force and the armed forces of Anglei. Their primary tasking was as helicopter gunships harassing the Algoquonan militias, though they did also on occasion function as transport helicopters, particularly for DELTA forces.

While numerous specialized variations of the AMS-72 exist, they are all based on one of four base models as detailed below:

The initial production model of the AMS-72 with a four-barrel AMG 12.7mm gatling gun in a ball mount under the cockpit.

Introduced in 1984. The B-model did away with the ball mounted gatling gun in favour of a fixed twin-barelled 30mm FNC mle 56 autocannon.

Introduced in 1999. The C-model added a Forward-looking infrared (FLIR) camera in a dome mount at the front of the cockpit, greatly increasing the AMS-72's targeting capabilities.

Introduced in 2018 as a very all-encompassing upgrade kit. The D-model replaced the fixed twin-barelled 30mm FNC mle 56 autocannon with a 30mm FNC mle 56/88 in a 360 degree rotating mount under the nose of the cockpit and also upgraded several other aspects of the aircraft including the engine. 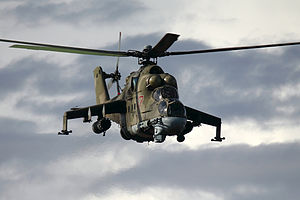 AMS-72B of the Army of the Air

AMS-72 of the Guard Cuirassier Division

The AMS-72 features heavily in much of Yonderian media for its iconic look and long service history. Video games, warfilms, comic books and more portray the exploits of AMS-72s.

List of equipment of the Armed Forces of Yonderre