Difference between revisions of "Black Forest"

The Black Forest (Burgoignesc: Forêt Neir, East Gothic: Schwarzwald) is a large, forested hill-range located in Donne in western Yonderre. The largest town in the Black Forest area is Spelph from the Barony of Stonne, while the town of Stonne itself functions as the region's unofficial capital. It is bounded by the Donne River valley to the West and North. The region is roughly oblong in shape with a length of 457 km (284 mi) and breadth of up to 120 km (75 mi). Much of the Black Forest was deforested as a result of the industrial revolution and was replanted in the mid-to-late nineteenth century as mostly spruce and fir monocultures.

The Black Forest takes its name from its historical concentration of oak, firs and spruce. Its Burgoignesc name Forêt Neir and its East Gothic name Schwarzwald are both directly related to this. It is unclear whether the Burgoignesc name, which is not known to have been used prior to the crusader invasion, was a translation of the East Gothic name or whether the names are coincidental.

The Black Forest has been inhabited by humans since before recorded history. The numerous lakes and tributaries of the Donne River provided ample sources of fresh water for the peoples who lived there, and the woods and caves provided shelter and building materials. Prior to the invasion by the Order of the Obsidian Sparrow, the Black Forest made up the Western border of the Chiefdom of Don alongside the Donne River. Some of the uprisings that preceded the Yonderian Peasants' War, including the potato movement, originated in the 16th century from the Black Forest.

During the Yonderian Peasants' War, the rebellious Black Host of Fabian Löwenschiold sought refuge in the Black Forest following the disastrous Massacre at Breitenfeld in 1642. The Black Host was eventually defeated the following year at the Battle of Stonne where the peasant army was surrounded and fought to destruction.

The hilled area on which the Black Forest itself grows is rich in minerals, especially coal and iron. Mining developed in the Black Forest due to its ore deposits. Small liquid magmatic deposits of nickel-magnetite gravel in norite were mined or prospected in the Heimwald forest near the villages Gor and Eichenhöh. An important mining area was the Loneur valley and its side valleys. The small mining settlement of Loneur near Stonne in the upper Loneur valley had many pits in which baryte, cobalt and silver of many kinds were mined. Compared with the Montgebirre and Vollardic Mountains the quantities of silver extracted in the Black Forest were rather modest however and reached only about five percent of that produced in the other silver-mining regions. 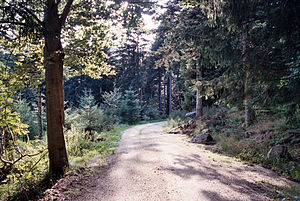 A track in the Black Forest

For several centuries logs from the Black Forest were rafted down the Donne River for use in the shipping industry, as construction timber and for other purposes. This branch of industry boomed in the 18th century and led to large-scale clearances and major deforestation. With the expansion of the railway and road network as alternative transportation, rafting largely came to an end in the late 19th century. The timber resources of the Black Forest provided the basis for other sectors of the economy that have now largely disappeared. Charcoal burners built their wood piles in the woods and produced charcoal which were important for the glassmaking industry. The Black Forest supplied raw materials and energy for the manufacture of forest glass.

Due to the large amounts of precipitation and elevation changes the Black Forest has significant hydropower potential. This was used until the 19th century especially for operating numerous mills, including sawmills and hammer mills and was one of the local factors in the industrialization of some Black Forest valleys.

The Black Forest has been home to several run-of-the-river power plants and pumped storage power stations since the mid twentieth century. These power plants continue to be important sources of renewable energy in Yonderre. 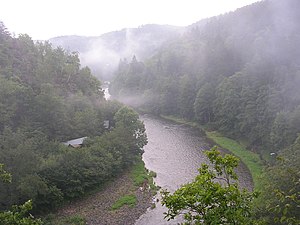 One of the major industries of the Black Forest is tourism. It is assessed that there are around 140,000 direct full-time jobs in the tourist sector and that there were around 40 million tourist overnight stays in 2025.

In spring, summer and autumn an extensive network of hiking trails and mountain bike routes enable different groups of people to use the region. For the winter months, skiing facilities are available in several places in the Black Forest. 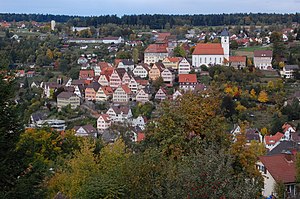 The Black Forest belongs completely to the County of Donne and lies within the Baronies of Nouvelle-Torantino, Nouvion and Stonne. The unofficial capital of the Black Forest is the town of Stonne, famous in Yonderre, and to a lesser extent Catholic Levantia, for its glassmaking industry.

The Black Forest Open Air Museum shows the life of sixteenth and seventeenth-century farmers and miners in the region, featuring a number of reconstructed Black Forest farms. An often visited town is Baine with its thermal baths and festival hall. Another is Stonne, famed for its colorful history and its glassmaking industry. The Black Forest featured in the philosophical development of communist thinker Thibaut de Berre. de Berre wrote and edited some of his works in a hut in the Black Forest which still stands today as a beer hall.