New Venceia is named after Venceia, the capital of Caphiria, as the people who settled it arrived from there. It is often considered the birthplace of Cartadania as the city was founded in 1306, making it the oldest permanent settlement in Cartadania. Despite this, much of the original city has been razed and rebuilt. Much of the modern city architecture borrows heavily from West Audonian architecture.

The city has a very diverse economy and has a recent particular trend towards investment and real estate. New Venceia also has the highest average household income in the nation at R$132,918 as of May 2037. In similar nature, it is one of the most expensive cities to own a home in the country as well, with some homes reaching into the upper hundred-millions. Two neighborhoods in particular, Aventine Downs and Valerian Sands have homes all starting above R$5 million.

New Venceia is a very well developed city, with an extensive yet efficient metro system running through all of the city's districts. The local authority for transportation, New Venceia Metro Authority, has a dynamic transit model that is revised once per fiscal year to keep things flowing. This means that when new areas of the city are developed, they won't be long without service.

Having been a city for over 700 years has given the city a very rich history, one shaped by time and location and continuing to be shaped by its residents.

Public schools in New Venceia are governed by New Venceia Public Schools, which is the second-largest school district in Alexandria (after Asura County. As of May 2037 it has a student enrollment of 281,416 and over 311 schools and centers.

Aerial view of the heart of the University of Alexandria, New Venceia

The University of Alexandria is the largest university in the state, serving all 117 of Alexandria's counties. It has an active enrollment of around 76,000 students and is ranked 4th in the country for universities. It sits in the University district on Salvada Avenue, between the Imperial Beach district and Hospital district, where the UAL Medical Center is located. It is a Tier-1 Research University and has an endowment of $21.3 billion. 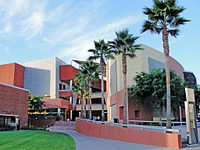 New Venceia College is a two-year community college located in the city's Ballentine district. It has an enrollment of approximately 92,000 students and has many areas of study. It has a matriculation agreement with UANV where students may transfer after two years to continue through an undergraduate degree. It also maintains dual-enrollment with New Venceia Public Schools.

Libraries in the city are managed by Metro City Library (MCL), an arm of the municipal government. There are 31 branches dispersed throughout the city, the largest of which is New Venceia Central Library (aka MCL1).

Like most of Alexandria, energy in the city is provided by Meridian Energy. The New Venceia Muncipal Water and Waste Commission is responsible for water mains and connections, as well as sewerage. Half of all city water is pumped in from other counties. Refuse is handled through contract by East Alexandria Waste Authority (EAWA).

Transportation in New Venceia is unique in that there is only one major highway that bisects the city (SR-1). All other highways are local roads owned by the city. The city is crisscrossed by many streets that lead to SR-1 or out of the city to nearby IH-45 for intercity movement. The city also has an extensive metro system composed of a bus network and a rapid transit rail system (METROrail). The city's tollway and bridges, together with the aforementioned transit systems, are managed by New Venceia Metro Authority. It sets the policies, procedures, and planning outlook for the systems and their day-to-day operations.