Difference between revisions of "New Yustona"

The Kingdom of New Yustona is a kingdom in Crona under a real union with Urcea, although it has alternatively been described as a colonial possession of Urcea. The Kingdom was established out of the earlier colony of New Yustona following its expansion during the War of the Northern Confederation. The Kingdom is a confederation of Levantine colonial settlements and native tribal polities that aligned themselves with Urcea during the war.

The territory now encompassing New Yustona was initially part of a larger entity in Western Crona known as the Northern Confederation. Established in the 17th century, the Northern Confederation aimed to solve long-standing disputes between a myriad of local tribes via Confederate arbitration. It was held that forming such a Confederation would help all members resist the incoming Levantine traders, who had already extracted trade interests and established treaty ports in Crona, particularly in Quetzenkel. The Confederation was comprised of six "great tribes" along with many smaller tribes and Cronite city-states; the Mixcala, the Cheektowaga, the Tepetlcali, the Tonawandis, the Algoquona, and the Schoharie. The Mixcala and Tepetlcali in particular frequently required Confederate intervention to prevent war.

In the 1850s, King Aedanicus VIII sought to acquire land in Crona to boost Urcea's prestige and, additionally, in order to find territory to settle veterans of the Third Caroline War. After much searching, the tribe of Schoharie, the southernmost tribe in the Northern Confederation, agreed to sell its marshy southern coastal region to Urcea for four million talers in 1857. King Aedanicus declared the territory the colony of New Yustona in 1858, and the new settlers arrived to find a difficult, swampy environment, which was only cleared through expensive application of new industrial technologies. Port St. Charles was established by the settlers in 1858, and by 1868 most of the bogs had been drained, allowing for arable land. Urcean colonists flooded into the country in the 1870s in light of constant overcrowding in Urcea, and by 1880 it was clear that the small territory was no longer sufficient to hold the growing population. Urcea declared war on the Schoharie in 1881 in the hopes that overwhelming Occidental power would prevent the Confederation from intervening, but it became clear that the gambit had failed as huge warbands and armies from the Confederation appeared on New Yustona's frontiers. Using the power of its advanced Royal Navy and bolt-action rifles, Urcea quickly seized coastal fishing areas, transforming the war into a war of attrition. Growing expenses lead to the war ending in 1883; Urcea was ceded some territory from the Schoharie but the effort was largely considered a failure due to the inability to win a decisive victory. The war had claimed the lives of thousands of natives, and the Schoharie living in the ceded territory fled northward, settling in the lands of the Tepetlcali and Algoquona. Many of the Schoharie living in its remaining territory also began to migrate northwards, as many believed it would only be a matter of time until the Urceans returned.

King Aedanicus VIII did intend to try again, but died in 1889, and the colony was considered one of the King's vanity projects. Following the Crown Regency and Red Interregnum, King Patrick III sought to restore Urcea's reputation abroad and to test Urcea's rebuilt military might. New Yustona had again reached its comfortable population limit, and the King intended to prove that it was not merely his father's side project - Urcea was here to stay. To that end, he deployed several of Urcea's rebuild Royal Navy ships to shell the Schoharie coast before a formal declaration of war came In August of 1908, after which time the Royal Army expeditionary force came to occupy Schoharie by the end of September, though they found it mostly depopulated. This time, the very well-armed Urcean expeditionary force defeated the Confederation in several major battles, advancing as far inland as the city of Tepetlcali in November of 1909 before malaria and supply issues forced the Urceans to turn back. The Confederate troops - armed mostly with muzzle loading rifles purchased from Audonian nations in the late 1860s - were overwhelmed by Urcean fire, but the sheer number of troops made a total victory over the Confederation difficult and it was determined that an advance past Schoharie would be impossible given the resolve of the Confederation. The Treaty of Electorsbourg ended the war in 1910; Urcea annexed Schoharie but agreed to recognize the Confederation's extant borders, and the Confederation agreed to open fair trade relations with Urcea. The Schoharie War was the last formal conflict fought between Urceans and Cronites in the 20th century, and Urcea formed strong trade relations with its Confederation neighbor, the tribe of the Mixcala. Though there was peace, numerous Urcean and other Levantine settlers filibustering into Confederate lands; these efforts were all defeated, sometimes with Urcean assistance.

New Yustona, as a confederation, consists of several tribes, cities, and the Urcean colony of New Yustona under the loose executive presidency of the Apostolic King of Urcea and his Governor-General in his stead, who the King directly nominates and submits for the approval of the Concilium Daoni in Urcea. The King, and consequently the Governor-General, has total control over the Kingdom's foreign policy, but relatively limited influence in the domestic affairs of the constituent parts of the Kingdoms save for the New Yustona colony, where the Crown exercises direct control. The Kingdom has a small central government apparatus, responsible for regulating relations between the constituent parts of the Kingdom as well as providing for the basic functions of a small welfare state; much of the domestic policy decisions are made at the constituent level, though the Kingdom's legislature has broad discretion to keep local laws and statutes similar by providing for legal baselines for conduct and the regulation of economic activity. Much of the government's activity is done under the purview of representatives of the Government of Urcea. Under the King and Governor-General is the Grand Council of the Kingdom of New Yustona, the Kingdom's legislature, which consists of three elected representatives from each constituent part for a total of twenty one members. 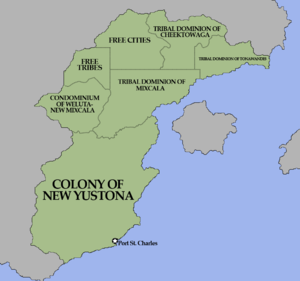 A map of the seven constituent parts of the Kingdom of New Yustona.

The seven constituent parts of the Kingdom of New Yustona are:

The Colony of New Yustona was established, as described above, in 1858. It is the largest constituency in the Kingdom both in terms of geography and demography; it comprises nearly half of the Kingdom's territory and is populated by 9 million people, more than half of the Kingdom's 16.5 million population as surveyed in 2034. Originally the expansive but sparsely populated territory of the Schoharie, the Colony of New Yustona slowly expanded over tribal territory from 1858 to 1910, during which time the population grew rapidly. Like Urcea's provinces, the Colony has an elected executive (called a Deputy) and a bicameral legislature comprised of the Colonial Senate and Colonial Assembly. Much of the colony's government mirrors that of the Government of Urcea, retaining a similar cabinet structure to that of the Concilium Purpaidá. The Colony is divided into fifteen dioceses, again mirroring the local government structure of Urcea. Unlike Urcea, New Yustona does not employ a guild system, and it employs only two kinds of localities; the Urcean commune and the Urcean polis.

Port St. Charles, governed as a polis, is the oldest city in the Colony of New Yustona. Originally serving as an important coaling station into "inner Crona" (the internal Sea of Nysdra region), the city became an important military port in the years leading up to the Great War, as the Urcean Royal Navy established the city as the headquarters of the new Nysdra Squadron, established in 1927 to protect the colony from foreign aggression. The colony was not harmed during the war, and following the conflict some veterans were given parcels of land in the colony. Despite these developments, New Yustona remained somewhat populous for a colony but largely irrelevant until the War of the Northern Confederation and discovery of uranium further north. With the establishment of the Kingdom, the Colony of New Yustona has become the cosmopolitan hub of the Kingdom and residence for many non-Levantine descended New Yustonese. Port St. Charles, as the Kingdom's capital city, has grown substantially with the establishment of political and diplomatic quarters; a large service economy has grown up around the Kingdom's central government apparatus, leading to beneficial ripple effects throughout the entire Colony. The Colony's population is overwhelmingly of Levantine descent, with 93.1% of the population in 2034 recording "some or entire Levantine ancestry", though the non-Levantine population is on the rise as Port St. Charles continues to grow as an economic hub. The growth of the city and attraction of people throughout the Kingdom has turned Port St. Charles - and the Colony as a whole - into a cultural melting pot, developing new and interesting variations on both native and Levantine cultural traditions.

The Condominium of Weluta-New Mixcala is jointly administered by the Colony of New Yustona and the Tribal Doninion of Mixcala. The territory, previously the lands of the Tepetlcali prior to the sack of the city by the Mixcalans, is primarily based on subsistence farming, as most industries had been destroyed during the War of the Northern Confederation. Mutual control over the territory was part of the initial agreement binding the Mixcalans and Urceans together. Consequently, both parties have been working to establish a long-term economic development ad investment plan.

The mostly depopulated region demographically consists of approximately two thirds native population - the remnants of the Tepetlcalis and Mixcalan settlers. The remaining third are Levantine smallholders or designed communities of Levantines. Both the Colony and Dominion are negotiating the potential of a fixed ratio of Mixcalan and Urcean settlers.

The Free Cities are a series of city states which were members of the Northern Confederation sitting on the border between Algoquona and Cheektowaga. These cities largely act autonomously of eachother and are self-governing. The Free Cities area is overseen by a Legate who serves a two year term, beginning with he first election in 2030. The Legate is elected by the mayors and chiefs of the various cities and has limited power. The primary responsibility of the Legate is to ensure fair trade relations between the cities and to raise the requisite number of soldiers from the cities according to the manpower needs of the Kingdom’s defenses. The Legate also commands the unified militias of the cities in time of war, being the primary individual responsible for defense of the border with Algoquona, aiming to slow Algoquona’s advance until the Royal and Imperial Army arrives.