Difference between revisions of "Revenue Guard"

Established in 1148, the Revenue Guard is an Burgundian law enforcement agency under the authority of the Ministry of Trade. The Revenue Guard are a Military Police, but not part of Ministry of National Security and Safety. It is responsible for dealing with piracy and other forms of maritime theft, financial crime and smuggling; it has also evolved into Burgundie's primary agency for suppressing the drugs trade. As a military corps, it maintains over 600 boats and ships and more than 100 aircraft to serve in its mission of patrolling Burgundie's territorial waters and many trade routes across Ixnay.

Formed in 1148 by the Triumverate Council the Revenue Guard was a royal institution commanded by a Lord Commandant who oversaw three Sergeants known as the Sergents della Maréchaussée (Sergeants of the Marshalcy), responsible for collecting taxes and arresting highwaymen, and three Captains known as the Capitaines della Guardacostes (Captains of the Coast Guard), responsible for collecting tariffs and suppressing smuggling and piracy. During the Christensen_Dynasty it flourished. The revenue guard grew in size from its original 7 men to 156. During the occupation by the Kingdom of Culfra, the Revenue Guard was relegated to collecting tolls on roads and lost its maritime capability.

The Pukhtun Piracy and Smuggling Network

Starting in the mid 1800s the maritime mission of the Revenue Guard made a dramatic shift. Instead of being tasked with the protection of all Burgundian trade they were given forward operating bases in the form of the island colonies of AyerSee and Sodermark. AyerSee in particular became the headquarters of the counter-piracy mission of the Revenue Guard. It's proximity to the Pukhtun Piracy and Smuggling Network's base of operations it's importance led to a spate of high-level investment in military-style infrastructure and maritime research. Many Kharkaans were hired to create this infrastructure quickly and cheaply. Sodermark too followed suit with the "hiring" of Kharkaans to build the necessary amenities for the Revenue Guard on the island.

Following Burgundian independence in 1812, Burgundie again become a world class trading nation. The maritime capabilities of the Revenue Guard were bolstered and expanded to protect this new status. Burgundian shipping lanes sprung up all over Ixnay and the Revenue Guard was tasked to protect not only Burgundian ships but all ships from piracy and peril. In 1853, with the acquisition of the oversea trading ports of AyerSee, Sodermark and Sturmhavn, the Revenue Guard was granted a large coastal land tract on AyerSee to establish a base of operations to fight pirates off the coasts of Pukhtunkhwa and Punth.

Today, the AyerMer Academy is renowned across Ixnay for training navies, coast guards and commercial shipping firms in counter-piracy techniques.

Also known as Dolphin Team Whiskey, or Delta Tango Whiskey, this team has special dispensation from the League of Nations with limited legal powers in international powers, primarily search and rescue missions but of note they have the "powers to maintain a safe working environment, by the means deemed vernacularly appropriate by the team leader". In the events resulting in the loss of life, the team is required to brief the League of Nations Security Council. 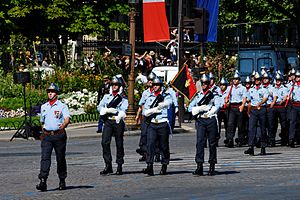 Brigade des engenhaire-pombiers Burgundie (BEBB), (Eng: Fire Brigade of Burgundie) is a militarized firefighting unit of the Revenue Guard. It oversees all multi-jurisdictional firefighting activity in Burgundie. While it resides within the Ministry of Trade, it often works very closely with the Emergency Management Agency of Burgundie, under the Civil Defense and Security Ministry.

All pombiers (Eng: firefighters) are combat trained infantrymen, as a standard part of the Revenue Guard training and maintenance curriculum, but are not considered combat soldiers. This distinction has been subject to a number of legal battles, but the Ministry of Trade has one each case on the premise that the pombiers preform life-risking duties in a daily basis and must, therefore, be in peak physical condition. Further, they have "special status" in the Standardized Militia Program meaning that their Fire Brigade training counts in lieu of Standardized Militia Program service.

Batalhons Penaux (Eng. Penal Battalions) is the Burgundian term for its collection of military penal units, supervised by the Penal Service Department of the Revenue Gaurd. Soldiers and civilian criminals are given the option to be sentenced to these units, in exchange for reduced sentences. Military members are stripped of their rank and redesignated as voluntari compromes (Eng. recruited volunteers). These units are divided into sindicats (Eng. labor companies), one is usually assigned to each overseas province, colony, or crownland in Burgundie and provide additional labor on large infrastructure projects. These units are held to a very strict codex de comportament (Eng. code of conduct), which if breached, extends the sentence in the Batalhons Penaux considerably.

There was one recorded case of a Batalhons Penaux mutiny. The Sindicats Burgundie (SiBurg), rebelled amid the civil unrest of the late 1960s but their rebellion failed and all of the members of SiBurg were executed.

Founded as a direct result of the deteriorating situation in Latium in the later half of 2027, the Vectigal Praesidio Imperium (English: Imperial Revenue Guard) was created by a directive of Lieutenant Imperial, Prince Kliebold IV of Burgundie. It is a controversial unit in that is was given Imperial Authority, but is directly controlled by a single member state of the empire. The unit is tasked with, "safeguarding revenue streams in the Empire (in particular the Confederacy of Latin States) as well as protecting Imperial staff and politicians within the Empire (in particular the Confederacy of Latin States). The Unit is currently comprised of 8,000 individuals who have been selected from the Revenue Guard, the Standardized Militia Program, the Navy and the Air Corps, and who, "exhibit skills particular to diplomatic engagement and enforcement across the Empire."