Amarre is one of Yonderre's nine counties. At 63,805 square miles it is the third largest of the Yonderian counties, and with a population of 10,840,697 it is the fifth most populous. Its capital and largest city is Toubourg which lies on the river Belt.

Amarre has been settled since antiquity by Goths, with archaeological evidence going as far back as 5,000 BC supporting permanent settlements in the Amarre region. Amarre was conquered by the Crusader force of the Order of the Obsidian Sparrow in 1468 and established as a stewardship under Guillaume de Houicourt. Amarre was raised to County-status in 1574 along with all other stewardships in Yonderre. Amarre is famed worldwide in modern times for the ale that is brewed there, a tradition begun with the establishment of monastries by the Crusaders. Toubourg Monastery is especially noted for its brewery, which is one of the largest in the world and one of Yonderre's largest employers.

The etymological origin of Amarre is uncertain. It has been variously theorized that the name is derived from the East Gothic Am Arre, "On the Arre" or "Around Arre", although there has yet to be a satisfactory suggestion as to what said "Arre" would have been. It has been speculated that "Arre" may have referred to an ancient Gothic city lost to the ages, particularly during the golden age of Yonderian national romanticism in the mid 19th century.

It has been theorized by scholars at Toubourg University that the name may be derived from the East Gothic words Alt and Mark, meaning "Old" and "Field" or "Marsh" respectively. This has been dismissed by scholars at Collinebourg University as a modern rationalization, but is regarded as a serious contender by Amaric authorities and is used as the official etymology in their records.

Archaeological evidence places the very earliest Amaric settlments at 5,000 BC. Amarre was settled originally by Gothic people coming in from the area that constitutes modern day United Kingdom. Although they initially lived in tribalistic village societies, there is evidence to suggest larger communities were established along the river Belt. Pottery shards and other ancient items have been uncovered around the site of modern day Toubourg. Amarre as it is understood in modern context has never been viewed as a single region by the Goths that inhabited it, but rather as several cheifdoms.

It is believed that Khovihnihk tribes briefly settled the Northernmost edges of Amarre around the 3rd Century, but that these were repulsed by the Gothic locals not long after arriving. Parts of Amarre came under Will of Wandsberg in the mid 7th century, but ultimately regained their independence in the chaos that followed his death and subsequent succession. Gothic scribe Dan Lärdmann writes in Chronica Gothica that the Goths of the region were known as the Södingar, the "Southerners" or "Southings", a term derived from their geographical location. Lärdman also notes that the Södingar were known for their countless profitable wineries, a claim supported elsewhere with Amaric wine being attested to as far away as Burgundie and Urcea.

At some point in the early 12th century, chief Theomund of Markingen established a major chiefdom in Amarre and parts of Somua and Montgebirre that became known as Chiefdom of Södarland. The chiefdom would continue to exist as a regional powerhouse in East Gothica until the crusader invasion when it was disbanded.

Amarre during the Crusader Invasion

Along with most of East Gothica, the Södingar of Amarre responded to the crusader invasion in 1458. The Södingar made up the smallest of the contingencies at the Battle of Willersthal, with around 500 warriors having made their way to Willing prior to the battle. Another force of almost 2,000 was on their way to Willing but returned home when they heard of the outcome of the distastrous battle. Amaric warriors partook in much of the fighting all over East Gothica and were noted as fine spearmen. Amarre itself came under attack during the southern campaign of the Order of the Obsidian Sparrow in 1468. Södarland's capital Markingen came under siege in June of 1468 and fell in September, with much of the remainder of Amarre falling short after. 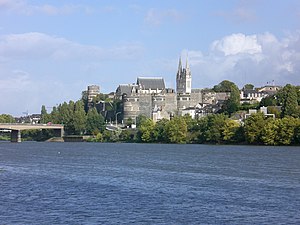 Toubourg Castle as seen from across the river Belt

Amarre came under the control of the crusaders of the Order of the Obsidian Sparrow during their Southern Campaign which lasted from 1468 until 1470. With the end of the Southern Campaign in 1470 Guillaume de Houicourt, one of the leading crusaders, was elected as the first Steward of the now-consolidated stewardship of Amarre by Joanus de Martigueux, the leader of the crusaders and the de facto Count of Yonderre. de Houicourt established several strongholds throughout Amarre, most notably his own residence Toubourg Castle on the river Belt around which the city of Toubourg grew. de Houicourt also established several monasteries, most notably Toubourg Monastery whose brewery operation has grown to become one of Yonderre's largest employers.