Today the Legion consists of 35,048 members, is still primarily Protestant, is excluded from operating in Levantia, is made up of 85% Burgundians and 15% foreigners and is the only permanent "army" unit in Burgundie.

Following the expulsion of the Protestants from Levantia during the Great Confessional War, Burgundie was flooded with Protestants and a Duke that was hostile to their presence in Burgundie. As an attempt to deal with their persistent presence and under pressure from the Holy Levantine Empire and the Papacy, Jarl Heneriks, Duke of Burgundie, created the Burgunder Utenlandsk Legion (Burgundian Foreign Legion) as a way to displace them, but bolster his military power. At is conception in 1577, the unit consisted of 1,000 Protestant men with 5 Catholic officers. They were trained as marines and were assigned to merchant ships conducting business outside of Levantia. This role persisted until the late 1800s when the needs of the thalosocrassy shifted and molded the legion to fit.

During the Occupation of Wintergen and Kiravian Pseudo-War and the subsequent occupations of AyerSee, Sodermark and Sturmhavn that permanent garrisons would need to be established to defend the islands. The Legion was re-purposed as amphibious infantry units. Their training consisted primarily of marine skills, but added amphibious assault and coastal defense to the repertoire.

The Kandaran Mounted Scouts are a calvary regiment specializeing in armored warfare and armored reconnaisance. To accomplish their role they are equipped with AMX-10 RCs and EBRC Jaguars.

Their role developed from its original form as voltigeurs at their formation in 1796, to the cavalry unit they are today. They are stationed in Joint Base Meriammajori, Levantine Ocean Command on Levantx. As of 1904, the unit was reduced to battalion strength, with 757 soldiers and officers. During the later years of the regime of the Burgundian West Punth Trading Company in Punth, the late 18th and early 19th centuries, the Kandaran Scouts were a reinforced regiment, often numbering over 6,000 men.

The Demi-Brigade is a select group of the nomadic Umardi tribesmen from Umardwal and Pukhgundi. Since their assistance in the waning era of the BWPTC's rule over southern Punth, the government signed an agreement with the tribe securing education and place in the Burgundian military. Since the signing of the accord in 1846, the tribesmen have sent 269,472 soldiers to serve with distinction in the Burgundian Army. Currently, the Demi-Brigade has 1,246 soldiers and officers and is based at Fort Safasi, Umardwal, the only unit in the Burgundian Security Forces permanently stationed outside of the territorial Burgundian thalossocracy. It is also the last segregated unit in the army, with its cadre of officers being exclusively "white" Bergendii and its soldiery being explicitly ethnically Umardi.

The Umardi Askaris are a unit of the Burgundian Foreign Legion formed of ethnic Umardi nationals who serve under Burgundian officers. It is the last and only segregated unit in the Army of Burgundie, with the codification of the roles of soldiers and officers being delineated by nationality and therefore race. Formed in 1723, the Askaris were a regiment in the colonial forces of the Burgundian West Punth Trading Empire, who traced their roots to the Oduniyyad Caliphate’s invasion of South Punth in the YEARS. They served as the core of the colonial troops in the empire’s Audonian holdings, particularly since they were Shia and the remainder of the continent was primarily Sunni. This was part of the empire’s deliberate divide and rule policies that utilized religious, cultural, and tribal differences to advance the empire’s aims. After the collapse of the empire the unit was disbanded in 1842. The remaining Umardi Askaris were sent to various Burgundian Foreign Legion units and their history was all but forgotten. Following the formation of the Islamic Republic of Umardwal the Burgundians struck a deal with the Islamic state to reconstitute the unit to be formed of Umardi criminals charged with anti-Islamic crimes, but not civil law breaches. Starting as a training company the unit exploded in size in the late 1980s and 1990s as Umardwal purged its secular sectors. By 1997 the unit reached its current regimental size and has not been expanded. Since the soldiery of unit is entirely made up of political prisoners they are considered one of the more expendable units in the Burgundian Foreign Legion, but it is also one of the more elite. The officers of the Askari’s are all recruited from the Provost Gendarmerie of Burgundie and serve as both officers and internal military police. This means the training is brutal and punishments for even minor infractions are severe. However, since the unit is one of the most active in the Army of Burgundie and because of its strict and martial command and lifestyle, the unit often performs well in overwhelming odds. They have been deployed during the following conflicts:

Seconded to the Burgundian Foreign Legion from the Umardi Emirate in 1867 during the Emirati War. The Zamburaks were formalized into the Legion in 1915 as a mountain artillery battalion. During Operation Kipling the unit was bolstered into the 1st and 2nd Zamburak Camel Artillery Regiments. In 1986 the 2nd Regiment was disbanded and its artillerymen and equipment were seconded to the 1st Regiment which became just the Zamburak Camel Artillery Regiment. Due to the nature of the camel-borne transportation, the artillery used by the Zamburaks historically fulfilled the direct fire role and been of lighter caliber. During Operation Kipling the standard mounted weapon was a M40 recoilless rifle. In the modern era the unit has adopted the MMP, the Mistral, as well as the [[Wikipedia: Mortier 120mm Rayé Tracté Modèle F1|RTF1]] (which gives it an indirect fire capability to the unit). While the camel is still the primary high alpine transportation method as well as the ceremonial transporter for the unit, the primary "lowland" vehicle of the unit is the DAGOR.

Imperial Camel Constablary is a Cuirassier demi-Brigade numbering 1,386 calvary men and officers. The unit is stationed across Flordeterra and headquartered at Garnisoenhuis, Monsunboch. They are a combat unit, but when not actively delpoyed they supplement the local Gendarmerie nacional.

The Fianna Tauth (Eng. Tribes of Warriors), is an ancient military unit that predates Burgundie buy centuries. The original Bergendii who settled Burgundie both fought and recruited the Fianna (Eng. warrior bands) throughout the nation's history. During the Great Confessional War, Burgundian aristocrats formed an army of the Fianna and were known throughout Ultmar for their ferocity. In 1953, during the Great Cronan War a volunteer regiment was raised and sent to fight in Flordeterra and became known as an Tauth (Eng. the Tribe). At the end of the war, they were given a permanent base in Flordeterra and build Fort Fearann na Treubh. Today, the regiment is 2,548 strong, whose mission primarily consists of Assault pioneers, but also has a strong logistics train that has been utilized by other Burgundian units operating in Crona.

The Raulie Bushrangers are a series of decentralized Chasseurs Forestiers battalions that operate in Burgundian Dericania: Adtaran, Bonavix, Cashen, Drusla, Eagaria, Esquinia and Pumbria. They are a form of military police and firefighting service, whose primary responsibility is maintaining the forests, highways and public lands in these provinces, but were drafted into the Burgundian Army after their transfer to Burgundian rule. They are an airborne assault regiment and in wartime provide advance guards and scouting parties. In total, the regiment consists of 7 battalions, totalling 4,584 men. 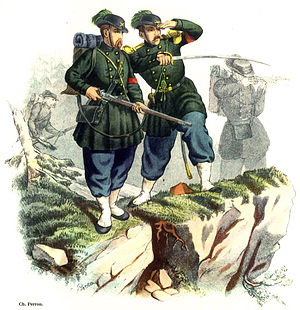 The 100 Chevaliers of Joanus (Burg: Les Cent Chevaliers de Joan, commonly Les Cent Chevs) is an independent Assault pioneer company of the Burgoignesc Foreign Legion's I Greater Levantine Division. They were originally raised in 1852 as a regiment of Yonderian mercenary cuirassiers in the First Fratricide. Their name is an homage to the Knights of the Realm (Burg: Chevaliers della reialme), but they are only spiritual successors of Siegmar von Willing's Black Company. The gens d'armes of the Black Company's success was noted by many not only for their military success, but also because they were not invested in the local politics and land squabbles. Being mercenaries they were classified as milites gregarii (non-noble cavalrymen). This helped maintain the fragile balances in the small courts of Kingdom of Dericania. As opposed to the milites nobiles (landed noble knights) or (Burg: Eques) who were constantly squabbling over land. For those princlings who could afford the services of the Black Company (Burg: Centes neirs), their services were crucial. The Vilauristre Conference and the Bishopric of Bonavix in particular used their services.

As the war expanded with the invasion of Vorenia by Bourgondi-Estie and Marialanus a larger army was needed quickly. Colonial units and mercenaries supplemented the counties militia. The reputation of the Centes neirs persisted through the ages and 300 years later another call was sent to the young men of Yonderre. 1,290 Yonderian Cuirassiers were recruited and trained under Bergendii officers.

18,000 men and about 84,000 of their family members petitioned to join the Burgundian Foreign Legion as the Bimalpal Volunteers division to avoid being caught up in the ethnic cleansing that was common in the Pursatni Bush War. The soldiers and their retainers were used to in the Pursatni Bush War but the territory was formally ceded to Pursat at the conclusion of the conflict. The Bimalpal Volunteers were then invited to join the Legion at their base in Nova Levantia. The division was used as part of the Burgundian response to the Quds War. It was curious that the retainers were also brought along as they had no military value. In the Battle of Ankirava, the division and all of its retainers were captured by the Recepi Army and little attempt was made to rescue them. The unit was almost immediately drummed off the rolls of the Burgundian Foreign Legion. The action caused an uproar in Tapakdore, who had seen the invitation of the retainers to join the soldiers in Nova Levantia as an olive branch between Burgundie and Tapakdore. The Burgundian government made a formal protest to the Legion, but no punitive action was ever taken.

The Pursatni Royal Dragoon Scouts (Burgundian: Reial Scouts de Drac de Pursat) was a special horse unit of the Legion, that operated in Operation Kipling against the communist guerrillas in Pursat, Kulaparkar, and Jaqolak. The unit was raised in 1966 and was disbanded in 1984 at the conclusion of Kipling's combat operations.

Formed in 1937 by the Bergendii farmers who remained in the Rhodainia region of Kandara to protect themselves from communist guerillas in the region, the group became an important part of the Burgundian intervention in southern Punth during Operation Kipling. The unit was all but subsumed into the Burgundian Foreign Legion, until the end of combat operations of those conflicts. The experience helped what had previously been a rag-tag group of armed farmers into a professional soldiery. The group continued to be an important part of Burgundie's strategy in Punth as its unaligned nature allowed Burgundie to utilize the force when sending Burgundian soldiers would have been politically disastrous. The group's equipment and training is entirely subsidized by the Burgundian Foreign Legion, although vague attempts to cover the money trail are made as a token of good faith.