Département d'Elite Tirailleurs de l'Armée ("Department of Elite Skirmishers of the Army"), commonly abbreviated DELTA, is an elite special forces group of the Yonderian Defence Force. It is headquartered in Nouvelle-Estia, approximately 20 kilometres (12 miles) southwest of central Collinebourg. Created in 1948 as part of the New Army agreement, DELTA was the result of the merger of several specialized divisional reconnaissance units to create a single national task force. While DELTA's scope initially was only militarily concerned, it has functioned as Yonderre's premier counter-terrorist since the need for such arose in the 1980s.

DELTA solves many of the Yonderian Defence Force's specialized reconnaissance and special operations tasks. DELTA specializes in a style of operation known as recon-subversive action whereby they infiltrate behind enemy lines, collect intel, destroy logistics and communications equipment of the enemy and then exfiltrate, leaving the enemy disorganized and in chaos. 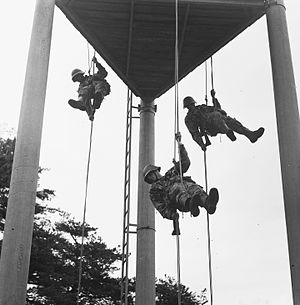 DELTA was establsihed towards the end of the Great War in 1948 as a result of the merger of several reconnaissance units of the Yonderian Defence Force. Although Yonderre was not part of the Great War, the Yonderian Defence Force maintained observers with almost every warring party and these wrote detailed reports all throughout the conflict that were thoroughly evaluated and analysed. It was determined by the Yonderian Defence Force in 1947 that major steps had to be taken to modernize the army, one of which was the establishment of the Special Operations Command. One of the SOC's very first actions was the creation of DELTA as an elite force of soldiers to perform special operations as they became neccesary. 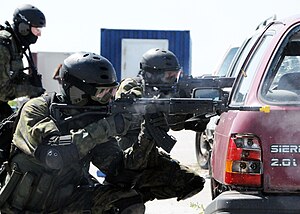 DELTA operators lay down suppressing fire during an exercise. 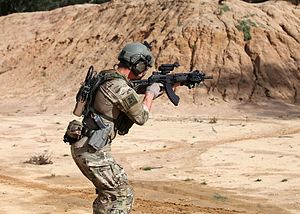 DELTA operator firing a FAMAG rifle during training in Urcea