Order of the Obsidian Sparrow

The Order of the Obsidian Sparrow is a late crusader order that was founded in 1429 by decree of Pope.... Established by a group of Burgundian noble knights who had become disenfranchised with what they saw as "vainglorious ineptitude of the leadership of the Order of Knights of the Hospital of Saint John". They sought to establish a new, more pious order "devoted to the work of the Lord and his flock." The pope granted the nobles a charter for a new order who took the Holy Hospitaller Order of St. Mark and the Obsidian Sparrow. They wanted to recognize the importance of their charitable work so they retained the Hospitaller title. They chose St. Mark as their patron saint for his evangelizing effort. The sparrow was chosen as a reference to Psalm 84:3, "The bird also has found a house, And the swallow a nest for herself, where she may lay her young, Even Your altars, O LORD of hosts, My King and my God." The knights, like the sparrow, may travel aboard and face great trials, but they will always return to God and his teachings as their true centering force.

The tale of the Obsidian Sparrow was told by Martin McDonavan, Duke of Solibris, considered the founder of the order, to the Pope thusly:

I came one day out of the chancellery of the Order [of Knights of the Hospital of Saint John] in a rage for the boasting and braggadocio in which they engaged. Flinging myself to the ground in the garden I prayed to Almighty God for a form of deliverance. Upon my prostrated form alighted an sparrow so dark and with feathers glossed that I thought it at first to be made of obsidian. I was so fraught with my anger that I sought to shake it away, but lo, it spoke: For I am a messenger of the Host Most High and He commands you to find your most pious men and seek from the Pope a new order, a righteous order without fanfare and pageantry. Seek to serve not to command and the Lord shall show you favor.

The "obsidian sparrow" was later identified by ornithologists as a Lark bunting, however this was the furthest north in Levantia that a Lark bunting has ever been reported. They mostly live in central Kistan and Kuhlfros as well as northern Urcea.

Status as a Subject of International Law

The Order is widely considered a sovereign subject of international law, even enjoying Extraterritoriality in many countries. However, the Order maintains all of the land it owns "on behalf of the host nation" and therefore is subject to those nations laws in the act of governing its holdings.

This bifurcated status has led to a number of famous court cases across Greater Ixnay in which the court was asked to decide if the knight to whom a criminal complaint was leveled against was acting as an individual (in which case extraterritoriality often applies) or as a governing representative of the Order, in which case the local laws apply. The Order has tried to distance themselves from the courtcases siting that the only knights who are allowed to carry political power (and therefore are subject to local law) are the dually appointment Knight-Governors of a province, "who are well known to the country's officials and legal system". All other knights cannot be subject to local laws on Order territory as they are private citizens "devoid of the prerogative to govern".

Founded in 1429, on the modern island province of Drusla, then known as Isulae Isti. They held the town of Hadua from 1429 until 1574. With the raising of the Joanusterrium to a Most Serene Duchy and election of Joanus de Martigueux to Grand Master of the Order, they retired from Hadua and moved their capital to Collinebourg.

In 1845, the Duke of Marialanus ceded the island of GrofSee to the order, which became its Sovereign Commandery from thenceforth.

Its principal mission is to reinforce the practice of Christian life by its members in absolute fidelity to the Pope; to sustain and assist the religious, spiritual, charitable and social works and rights of the Levantine Catholic Church and the Christians in the Holy Land, which annually receives some 10 million Imperial Dollars by the donations of the members of the order. Other various activities around the world are connected to their original functions.

The offices of the grand magisterium are situated in the headquarters in GrofSee.

Above the shield of the Armorial Bearings is a mantling of brugundy, sovereign's gold helmet upon which is a 8-point cross (the cross granted to the Order by Pope... in 1684). The mantle is ermine on the interior after the Duke of Solibris's arms, the first appointed knight of the order. Beneath the mantle is the 8 pointed cross blanc with the pearl rosary that the noble knights wear. In the center is the badge with the obsidian sparrow.

The motto is "Nam Claritas Dei" (translation: "For the Glory of God").

The Order of the Obsidian Sparrow and the Sovereign Military Order of the Fiann are the only two institutions whose insignia may be displayed in a clerical coat of arms.

The order has a predominantly burgundy-colored levée dress court uniform, and a more modern, military-style uniform, both of which are now only occasionally used in some jurisdictions. Pope... ordained that usual modern choir (i.e. church) dress of knights be the order's cape or mantle: a "grey cloak with the Obsidian Sparrow", as worn by the original knights. Dames wear a burgundy cape with a Obsidian Sparrow bordered with gold.

The order today is estimated to have some 23,000 members in 52 Lieutenancies around the world, including Monarchs, Crown Princes and their consorts and heads of state from countries such as Aëscárácta, Burgundie, Pauldustllah and Zwallerkad.

Membership of the order is by invitation only, to practicing Catholic men and women—laity and clergy—of good character, minimum 25 years of age, who have distinguished themselves for concern of the Christians of the Holy Land. Aspirant members must be recommended by their local bishop with the support of several members of the order, and are required to make a generous donation as a "passage fee", echoing the ancient practice of crusaders paying their passage to the Holy Land, as well as an annual financial offering for works undertaken in the Holy Land, throughout their life. There is a provision for the Grand Master to admit members by motu proprio in exceptional circumstances and also for the officers of the Grand Magistery to occasionally recommend candidates to the Grand Master.

The honor of knighthood and any subsequent promotions are conferred by the Holy See through diploma sealed and signed by the Assessor for General Affairs of the Secretariat of State in Urceopolis as well as the Cardinal Grand Master, which approves each person, in the name of and by the authority of the Pope. The candidate is subsequently knighted or promoted in a solemn ceremony with a Cardinal or major prelate presiding.

Members of the order may not join, or attend the events of, any other order that is not recognized by the Holy See or by a sovereign state, and must renounce any membership in such organisations before being appointed a Knight of the Obsidian Sparrow. Members may be expelled from the order in circumstances where they breach its rules of conduct.

There are several grades of knighthood. These are open to both men and women. While laity may be promoted to any rank, clergy's ranks are usually: Cardinals are generally Knights Grand Cross, Bishops are Commanders with Star, and priests start with the rank of Knight but may be promoted to Commander.
Dames wear chest ribbons rather than neck crosses, and the military trophies in insignia and heraldic additaments are replaced by bows.

The titles of the ranks in English

In some jurisdictions the term "Lady" is used rather than "Dame," but this is a misnomer since the honorific term of Lady refers to the wife of a Knight. However, a woman upon whom the Order has been conferred is properly termed a "Dame". 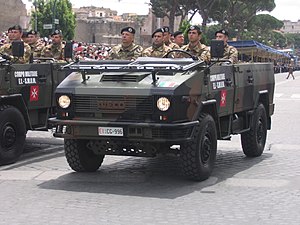 Military Corps of the Order of the Obsidian Sparrow, MCOOS, in parade during Coronation Parade for Emperor Riordan I in Urceopolis (2028).

Mayor Dagor Sjallörad in ceremonial dress receiving his promotion to Knight Commander in 2019.

While serving as a commissioned officer of the Military Corps of the Order of the Obsidian Sparrow (MCOOS) members are entitled to wear the "Blessed and Righteous Armor of the Ancestral", a custom suit of armor that must follow specific guidelines. They are as follows:

For the horse, the guidelines are more simple:

Military History of the Order

Decline of the Military Corps 1800s-Present