The Haunted Woods (Coscivian: Yarónix Kelvar) are several areas of dense woodland in the Krasoa Islands, occupying the deep inland areas of Eastion Island, Drakostea Island, and Ixanar Island. Made up of both hardwood and coniferous trees, these areas form a temperate mixed forest ecosystem that harbors a fairly diverse assortment of fauna and secondary flora, and are of significant interest to naturalists.

The name of the forests derives from the assertion by Coscivian colonists that the forests are, in fact, haunted. The very appearance of the forests, with dark foliage and an abnormally high frequency of stunted and twisted trees, contributes to this belief, as does their reputation for paranormal phenomena. Reports of odd occurences in and around the forests, including both local rumours and official incident reports made by forest rangers, are about as old as the Coscivian presence in Krasoa. These include strange sounds, unexplained disappearances, and various cryptid sightings.

The Haunted Woods are also home to the indigenous population that inhabited the islands prior their colonisation by Coscivians. These people, officially designated as Endrakrasoax Kelvartrebárya ("Inner-Krasoan Forest-dwellers") but colloquially referred to as eþrūdíbruvya ("tree-creeps") by Coscivian-Krasoans, live in a few small settlements and a larger number of isolated dwellings scattered throughout the forest. They typically refuse contact with the outside world except to purchase cigarettes and liquor from Coscivian trading posts on the edge of the forests. Their lifestyle is bizarre and poorly understood, with most extant information on it coming from firsthand accounts by Forest Service personnel and a publication called The Haunted Herald that mysteriously appears at trading posts at irregular intervals and appears to be written by a literate indigene. 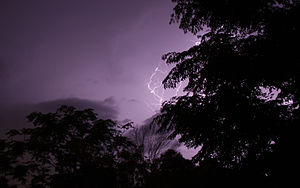