Kartika is the capital city of the Kiravian Federacy and of the District of Coïnvra. Established for the sole purpose of housing the Federal government in 210XX, Kartika is the seat of the Federal Stanora and the High Court, as well as the official residence of the Prime Executive and administrative headquarters of most Federal agencies. Its metropolitan area, referred to as the "Federal Capital Region" includes the remainder of the District of Coïnvra and extends far into southern Hanoram and northern Ventarya. The presence of the Federal government has turned the Federal Capital Region into a hub for the defence, aerospace, biomedical, consulting, information technology, legal, and governmental-relations industries. While the Kartika Metro Area is not the Federacy's largest, it is consistently ranked as its wealthiest and best-educated.

Prior to Coscivian colonisation, the lower Koīn River valley was inhabited by the Yàpi (Gàdamyàpi) tribe. The Gàdamyàpi were violently displaced from the area during the Template:H:title by Coscivians, who established large manorial estates on either side of the river, which formed the boundary between the Imperial provinces of Venterya on the right bank and Hanoram on the left. [Main plantations and names]. As with the rest of the Míhanska Bay region during the colonial period, commerce was mainly conducted by merchant ships sailing to ports on the bay and up its many inlets, estuaries, and navigable rivers to trade directly with the manorial villages. Market towns were slow to appear, and were rather few and far between. The first reasonably urban settlement in the area, and indeed, the first incarnation of Kartika, was a fort established in Template:H:title to secure the river confluence and serve as a military and administrative base for control of the Ventarya-Hanoram backcountry. Dedicated to Emperor Kartik IV, the fort began as a series of wooden palisades and earthworks, which in Template:H:title began to be improved with masonry. However, the improvements were still unfinished in 20291 when catastrophic flooding destroyed most of Fort Kartik.

Kartika is more or less a planned city, having lain largely abandoned between 2XXXX and its selection as the federal capital in 2XXXX. Its original planners hoped to emulate the majesty and elegance of Coscivium, the imperial capital of Coscivian civilisation, while avoiding the sanitary problems, overcrowding, and periodic urban decay that came along with the ancient city's centuries of poorly-managed growth. In the words of Ergastur Ænórvinden, who oversaw the construction of the Federal Quadrangle, "It was important that the physical form of this city embody and legitimise the government that would rule from it. Continuity with the Empire was a necessity, but so too was the idea that in Kiravia the Coscivian race could and would begin anew, applying and improving upon their inheritance on the shores of a virgin land."

As such, Kartika has always been a comparatively open city: Large swathes of its area are reserved as public parks, arboreta, sculpture gardens, and courtyards. Wide avenues and public walkways decrease congestion in the city's highest-traffic areas. Unusually for a major Kiravian city, Kartika's skyline is devoid of skyscrapers (no buildings exceed 12 stories), and sunlight (however obscured it normally is by the wet weather) is reaches the streets and windows with little obstruction. These conditions, combined with the lack of heavy industry and the large number of iconic and architecturally impressive monuments, statues, and government edifices populating the cityscape have resulted in Kartika being widely considered the most beautiful of the Federacy's large cities.

From its refounding, Kartika has been an independent city within the District of Coīnvra, and is administratively separate from the surrounding Coīnvra Countyship and the adjacent City of Éamonsar. The municipal legislature is the City Council (Kiravic: Saarcoƿar), which comprises six seats for each electoral ward and two at-large seats. The entire council is subject to bienniel reëlection. The city's chief executive is the Provost, elected triennially. Political parties are banned in the District of Coïnvra, and all candidates must stand as independents.

Affectionately referred to as "Kiravia's oldest, biggest company town", Kartika's economy revolves almost entirely around governance. The federal government is the largest employer in the city, with the District of Coïnvra government a distant second. Thousands of interest groups, think-tanks, public advocacy groups, media outlets, NGOs, public relations and political management groups, consulting firms, and law and accounting practices intimately involved with politics and policy are based in the Kartika, as are a large number of defence, engineering, insurance, general services, and other corporations that rely heavily on federal contracts.

High-end shops, restaurants, hôtels, and drinking establishments cater to the tastes of the Kiravian political and business élite, as well as to that of the city's many foreign visitors. Due to the large annual traffic of business and other travellers to the city, the Kartika metropolitan area has the third-largest hospitality industry in the Federacy, behind the vastly more populous conurbations of Valēka and Escarda.

After Valēka and Saar-Silverda, Kartika has the highest cost of living of any Kiravian city. Real estate prices are some of the highest in the country, especially in neighborhoods on the upper banks of the Coīnvra River. The high volume of daily commuters into the city puts a premium on housing in the city centre and has driven the growth of transit-oriented developments in the city's outer districts and even more so in the suburbs.

Although the wider metropolitan area produces aerospace and defence equipment, scientific and medical instruments, and other products, there is very little manufacturing in Kartika proper. Brewing accounts for most of the city's meager industrial output, with most of the remainder made up by the manufacture of high value-added specialty products, such as dental equipment, upmarket recreational telescopes, and jewellery. 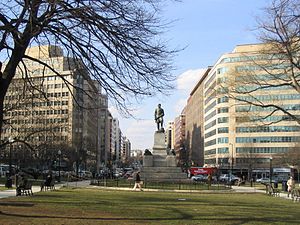 Iarphelan Square in late winter. Parkland covers a large part of the city.