The AMG-34 was a light tank designed in Yonderre and operated by the Yonderian Armed Forces for the majority of the Great War. The AMG-34 was designed and produced by the Atelier de Mechanique de Gabion to meet the requirements of the Army Procurement Command who sought a light tank to fit the role of armoured recon and deep operations. 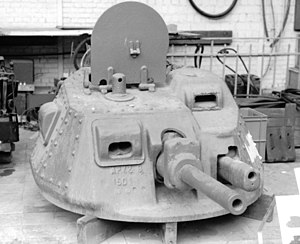 Close-up of an AMG-34 turret

Immediately in the aftermath of adopting the CdC mle 1930, the Yonderian Armed Forces was acutely aware of the inadequacies the vehicle presented. When armoured doctrine was fully established by the end of 1930, the Ministry of War ordered its Department of Tank Design to draw up the specifications for vehicles to fit the doctrine. The doctrine as written called for two types of tank: a cavalry tank of medium weight and speed to punch a hole in the opposing force, and a light tank to exploit the opening and conduct combat operations behind enemy lines. The specifications drawn up for the former would be met by the AMS-35, while the latter role would be filled by the AMG-34.

Work on the AMG-34 began in AMG's design offices in Gabion in early 1931, as soon as the design specifications became known. The first prototype was ready in the Spring of 1933. It competed in trials against the Department of Tank Designs' bid, DCC-2, as well as the Urcean SAV-5. The DCC-2 was discarded early on in the trials, citing the one-man turret as a major deficiency and the tank's tendency to throw its track when halting suddenly. Despite some noted concerns about its reliability the SAV-5 performed admirably in testing. Ultimately the choice fell on the AMG bid despite some kinks in the prototype, the conclusion of the final report on the light tank adoption programme citing uncertainty about the ability to procure sufficient numbers of the SAV-5 from the Urceans, as well as the AMG vehicle's thicker armour and better overall maneuverability.

Following further development the tank was adopted in May of 1934 as the AMG-34. The vehicle was recieved well by its crews, stating that although it was a bit slower than its predecessor, the addition of thicker armour and a cannon was a welcome one. The AMG-34 would go on to serve with the armoured regiments of the Yonderian Armed Forces until 1950, when they were finally replaced by the AMY-13t. 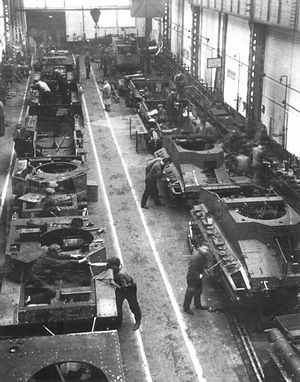 Between 1934 and 1939 a total of 678 vehicles were delivered from AMG's factory in Gabion, with the greatest number produced at 213 in 1936. A large order of spare parts was produced in 1944 to prolong the service life of the AMGs.

The AMG-34 was in service with the Yonderian Armed Forces from its adoption in 1934 until 1950 when it was replaced by the AMY-13t. Although they had been highly modern vehicles at the time of their adoption in 1934, the age of the AMG-34 was showing by the time it was replaced sixteen years later. Upgrades were made to the AMG-34 over its service life, including an overhaul programme in 1941 conducted in AMG's factory in Gabion that saw the vehicle's radios and sights modernized.

List of equipment of the Armed Forces of Yonderre