The Minor Overseas Possessions of the Kiravian Federacy are those territories subject to Kiravian sovereignty that are of comparatively minor significance due to their small geographic size, small or nonexistant population, or low strategic value. "Minor Overseas Possession" is not a formal or official designation: Most of the territories included under the label have the same legal status as more important jurisdictions.

The Antarctic Ocean Colony (Kiravic: Axerca Âsoatúlcax Páscá) is, contrary to its name, not a chartered colony, but rather a dependency situated on a small group of islets in the "Antarctic Ocean" region of the Southern Ocean. The islands have a tundra climate bordering on subpolar oceanic and support a permanent population of 834. Kiravian settlement in the AOC was begun by traders doing business with the once-flourishing native populations of neighbouring archipelagos, but as globalisation and emigration caused these native populations to decline, so did the Kiravian colony. Today, the economy of the AOC is supported by a uranium ore-processing plant, fishing, tourism, and a Kiravian Littoral Force unit involved mianly in search-and-rescue and anti-whaling operations.

Acrcocomia is a rainy, coal-rich tropical island in the Prospect Antilles named for the genus of palms that cover much of the island. It was claimed in 21198 following the discovery of the archipelago by the nation of United Southernours. Thus far, it has undergone meager and sluggish development, mostly due to the difficulty of attracting Coscivian colonists to the hot climate, creating much political debate over whether the island should be retained as a colony, sold, or held as a supervised reserve for the small indigenous population.

Fanlin Island is a small, subtropical island strategically located along a major air route between Ixnay and Maredoratica, making it an important refueling stop for long-haul flights. The permanent population of just over 700 is primarily employed at either Fanlin Air Service Station (the small airport serving commercial planes) or at Fanlin Island Airbase, an installation of the Kiravian Army Aircorps. Politically, the island is an Intendancy governed by an appointee of the Prime Executive. There are three civillian settlements on the island: Iþasca, Bayecôta, and Vontsar. Iþasca serves as the capital and is home to government offices and most commercial establishments, while Bayecôta and Vontsar are wholly residential.

Frost Bight Island (Kiravic: Ion Ɣulsceróx Bivnimontá) is a small, uninhabited island in the Subarctic Sea. Its existence was first noted by Kiravian explorer Silkas Kovaken, who sent his men to fish in the shallow waters surrounding the island to replenish their food stocks. It was later visited by Kiravian fishermen from Atovera who named the island for the frost-hardy endemic bight grasses (Bromus sini). A small contingent of ethnic Kelnordem occupied the island between 21125 and 21177, before a polar cyclone forced them to evacuate to the Atovera Colony and destroyed the island's sole village, Ɣulscōmonta. The island was declared a property of the Federal government in 21179 and designated it a Federal Nature Reserve, though the former residents and their descendants have petitioned the government for permission to return. The island is covered mainly by dense thickets of coniferous trees and receives heavy snowfall.

The 'Giscardia Shipping Base Territory (Kiravic: Scírēn Sólúpistitorcantut Giscardiayē) or Transoptria River Territory (Scrírēn Perlioptriaruril) is a parcel of land 30 square kilometres in area on the right bank of the Transoptria River in the region of Giscardia. The territory was claimed to secure Kiravian navigation rights on the river, which is an important shipping route between the Kiravian colonies of Iscardia, Enothisca, and Vortisia on one end and Rurin Ilvipelal and Urenia on the other. Though Kiravian planners hope that further colonisation of Transoptria by other nations will eventually foster the growth of a trading city in the territory, the only current improvements in the GSB are a dock, a shipping depôt, and a small riverside settlement with around 120 residents called Rurimur, which serves as the capital. 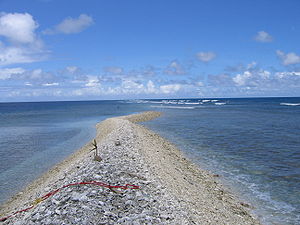 Kiwa Hirsuta Reef (Kiravic: Śelva Kiʋahirustá) is a largely submerged reef located in the New Pacific region. At low tide, it has a land area of 0.017 square kilometres. Due to its lack of dry land and natural resources, the island has no population and hosts no economic activities. Originally named Seventh Day Reef after the day of the week that it was sighted by a Kiravian navy ship from the North Fleet Islands, the reef was renamed in 21200 due to its proximity to the Narayama Trench, which is home to significant populations of the deep-sea crustacean Kiwa hirsuta.

Tæritha (Kiravic: Tæriþa) is a federation of three small Kiravian territories in Oriental Constanta: The Pinehurst Islands, the Blue Spruce Islands, and the Black Spruce Islands. The three archiplegos are locted in the northwestern corner of the region, in an area of water known as the Ligra Sea. The islands have a combined population of 96,341 and have an economy based primarily on fishing, subsistence agriculture, and two small mining operations. Though they retain separate legislatures and Governors-Resident, the colonies have a shared revenue service, state defence force, fisheries bureau based in Amërnasar, Pinehurst Islands. Laws regarding taxation and the shared agencies are passed by joint sessions of the territorial legislatures and approved by unanimous cosent of th Governors-Resident, who rotate annually as superintendant of the shared agencies.