Sennium Province (Banlieueregis Sennium), is a Province of south-east Caphiria, . With a population over 40 million, Sennium is the 4th least-populous province and its capital is Juleone. In the late 18th century, Sennium (and three other eastern provinces) fought for its independence in the Veltorine War of Independence and formed the Veltorine People's Republic. This republic was short-lived, lasting 170 years and after the Great War, Sennium and the three other provinces were re-annexed by Caphiria.

Because of this, the eastern provinces that comprised of Veltorina developed an identity related to, but independent of, the Caphirian people. Sennium has a population of 40.7 million which makes it the 4th-smallest province but one of the largest by population density. The sparse population of the province is due to the Intaris Mountains which cut through most of the land. 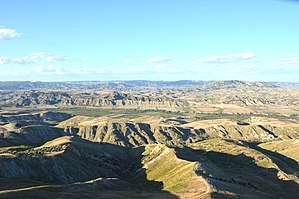 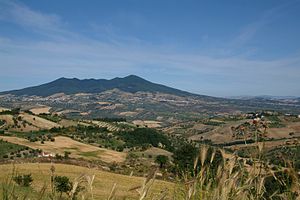 A view of the Livara region

Sennium covers an extensive part of the southern Intaris, between the Palavi river in the north and the Adstraies mastiff in the south. It is the most mountainous province in the southeast of Caphiria. 47% of its area is covered by mountains, 45% is hilly and the final 8% is made up of plains.

Geological features of the province include the volcanic formations of Artungravo and the seismic faults in the Laveia and Driacum regions. A large portion of the province was devastated in 1834 during a massive earthquake, and more recently in 1997 when an earthquake destroyed many towns in the northwest of the province.

The mountainous terrain combined with weak rock and soil types makes landslides prevalent. While the lithological structure of the substratum and its chaotic tectonic deformation predispose the slope to landslides, this problem is compounded by the lack of forested land. In fact, similar to other provinces, Balatum was once rich of dense forests, which were stripped and made barren during the Caphirian Republic.

Sennium is one of the few Caphirian provinces with no coastline and so its climate is one of the most stable and predictable in the Imperium. In general, the climate is continental in the mountains and Mediterranean elsewhere.

The bulk of Sennium's economy is farming. Cultivation consists mainly of sowables (especially wheat), which represent 46% of the total land. Potatoes and maize are produced in the mountain areas. Olives and vine production is relatively small with about 31,000 hectares (77,000 acres) under cultivation. Wine is another significant export, with over a dozen unique grape variations growing in the area. There are also large herds of cattle (177,711 head in 2020).

Among industrial activities, the manufacturing sector contributes to the gross value added of the secondary sector with 64% of the total, while the building sector contributes 24%. Within the services sector, the main activities in terms of gross value added are business activities, distributive trade, education and public administration. In the last few years, new productive sectors have developed: manufacturing, automotive, and especially oil extraction.

Although Senniumhas never had a large population, there have nevertheless been quite considerable fluctuations in the demographic pattern of the province. There was a slow increase in the population until the Great War, after which there was a resurgence of emigration to other countries in Sarpedon, which continued until 1981 and the start of another period of steady increase until 2000. However, in recent years the population has decreased as a result of a new wave of migration.

The population density is very high compared to that of Caphiria as a whole.