The Yonderian Golden Age (Burgoignesc: L'âge d'or Yonderresc, Gothic: Yondersche Goldalter) is a name given by historians and sociologists to a period of exceptional societal, scientific and cultural advances that took place in Yonderre during the nineteenth century. Historians and sociologists disagree on the exact start and end dates of the period, but a widely accepted consensus is that Michael Falks' book My Yonderre released in 1820 was the catalyst that started the period. End date is generally accepted as the start of the twentieth century, but are also variously given as 1890s and even up to the end of the 1900s with the beginning of the Great Depression.

The creation of a singular Yonderian culture across the previous boundaries of Burgoignesc and Gothic cultures is often lauded as the greatest achievement of the Yonderian Golden Age. The 1820s and 30s were a period of major societal reform in Yonderre with the introduction of reforms for the peasantry, the signing of the Constitution of Yonderre in 1833 which brought with it the Yonderian Parliament, reforms to the Custodes Yonderre and a common code of law across all Counties of Yonderre. Neo-classical architecture became the dominant style of the period, leaving a distinct look to major cities like Collinebourg and Gabion. Scientific advances were made in several fields by Yonderians including physicist Rachet d'Everard, chemist Eberhard Sass, philosopher Hieronymus von Kähler and paleontologists Killian Lange and Thibaut d'Avignon. The period also brought with it major advances in the arts such as the prime of Anders von Necksee whose idealized paintings of rural Yonderre received international acclaim and playwright Hieronymus d'Olbourg whose historical plays like Siegmar the Iron-Handed and Löwenschiold played an important part in the shaping of Yonderian national romanticism.

A critical factor for the start of the period was the increase in literacy in Yonderian society and improvements in printing technology, both of which allowed the exchange of ideas at a much faster rate than previously possible. Another crucial component was the Grand Duke of Yonderre Falco IV Sentinelleau, whose election and ascension to the throne in May of 1820 brought with it a milieu in which major societal reform was not only possible but probable. Urbanization, caused in no small part by industrialization and the doubling of Yonderre's population between 1760-1860, was also a leading factor in the creation of a common Yonderian culture.

Because of the Yonderian Golden Age, Yonderre has undergone significant social and political evolution and restructuring which moved it away from its traditional structures. Historians and sociologists refer to this as the Northern Ideal, a series of observations and concepts related to how the people of Yonderre view themselves and their history.

Michael Falks, postman and author of My Yonderre, often attributed as catalyst for the Yonderian Golden Age

Since the Conquest of Joanusterra in the fifteenth century, Yonderre had been socially divided as much along cultural lines, Burgoignesc and Gothic, as it had been along class lines. Sociologists argue the existence of four distinctive classes in Yonderre between the fifteenth and nineteenth centuries, these being the nobility, clergy, burghers and peasantry, and further argue the existence of subdivisions in each class based on cultural and ethnic heritage. Sociologists further argue that even subdivisions like Bergendii burghers in Collinebourg were further divided between those whose families had arrived in Yonderre with the crusaders in the fifteenth century and those whose families had settled in the subsequent centuries.

In the period between the Conquest of Joanusterra and the Yonderian Golden Age (a period typically referred to as the early modern period), Yonderre witnessed three major civil wars all of which were either based on or heavily influenced by cultural tension between the (typically) Gothic peasantry and the mostly Bergendii clergy and nobility, with the burghers typically standing somewhere in-between. The last of the civil wars, the Second Potato War, ended with the rebelling peasantry soundly defeated in 1788, but unlike the previous Yonderian Peasants' War of 1641-43, Grand Duke of Yonderre Auguste III de Somua made concessions to the peasantry, abolishing the highly unpopular Potato Laws that had caused the war in the first place. Being the last major display of cultural tension on this scale in Yonderre, some sociologists like Nicolas Boucault contend that Yonderre then experienced what they refer to as a "long nineteenth century", beginning with the end of the Second Potato War in 1788 and ending with the Great Depression in 1910.[1]

Apart from the abolition of the Potato Laws however, Grand Duke of Yonderre Auguste III de Somua did not make further concessions to the peasantry and continued to rule Yonderre as an absolute monarch. With his death in 1820 however, Falco IV Sentinelleau was elected Grand Duke of Yonderre. Inspired in no small part by the Urcean ideology of Crown Liberalism and its National Pact, Falco IV was more sympathetic to the plight of the peasantry than his predecessor and instituted reforms in the Autumn of 1820 which sought to enable the peasants to buy the farms and land they worked by lowering taxation. The reforms were met with some resistance from the nobility whose incomes depended on taxing the peasantry that they effectively owned through ownership of the farms, but these never evolved past complaints and were largely silenced by the time the Constitution of Yonderre was signed into place in 1833, effectively ending the lordship over peasantry for anyone but the Grand Duke as sovereign. The question of Gothic and Burgoignesc cultures as incompatible remained, however. 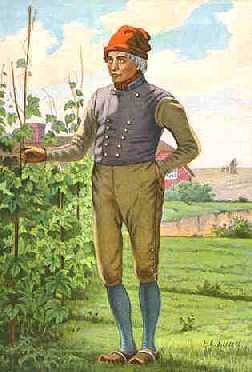 A depiction of a Gothic peasant ca. 1800

My Yonderre and early advances 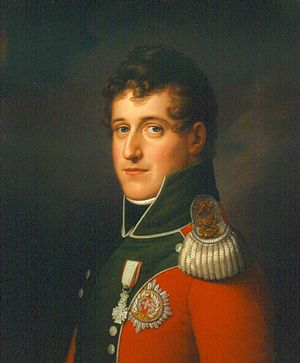 On 15 May 1820, Yonderian postman Michael Falks published the book My Yonderre with the Collinebourg news outlet and printer Collinsches Zeitung.[2] My Yonderre is an essay in which Falks philosophizes over the different layers of society he witnessed as a postman in Collinebourg County. Falks concludes that the difference between Gothic and Bergendii Yonderians was smaller than most people were willing to admit, and that the view of Yondero-Gothic and Yondero-Bergendii people and societies as separate or even incompatible with one another was antiquated and had run its course. Because of the Schooling Law of 1808 which required all children to be educated regularly from the age of seven until their confirmation around the age of fourteen, literacy had increased across Yonderre substantially, particularly in the urban centers. This allowed a much larger part of the population to partake in political and societal discourse than ever before, and Collinebourgers soon took to Falks' book.

The essay was initially printed only in 25 examples in Gothic on relatively cheap paper, but when the book sold out in two days on the Collinebourg Bourse, Collinsches Zeitung resumed printing, offering cheap versions like the original run and more expensive prints on better paper. The Collinebourg Gazette bought the rights from Falks to print and translate My Yonderre into Burgoignesc for a modest sum and small annual pension. The Burgoignesc language print of My Yonderre became available in the Autumn of 1820 and soon sold as fast as the books could be printed. My Yonderre caught on with the well-to-do and commoners alike, and copies soon found their way to other cities across Yonderre. Paid public readings occured in town halls and public houses across urban and rural Yonderre alike for the benefit of those who could not afford the book or read for themselves, and Falks' ideas quickly found their way to all levels of society.

The excitement was not absolute however. Professors of the University of Collinebourg, particularly of the theological and literary faculties, initially critized Falks' book for being "of small intellect, poorly written and borderline revolutionary".[3] Neither did My Yonderre instantly become fashionable with the most well-to-do burghers of Collinebourg before it was rumored that the Grand Duke himself had not only read the book, but that he had read the Gothic language edition. Whether true or not, the rumor caused many in the chiefly Bergendii higher society to purchase the book in Gothic, whether they understood the language or not, such was the status of reading the same book as the Grand Duke.

Constitution of Yonderre and societal reforms

Personal liberty shall be inviolable. No Yonderian subject shall in any manner whatever be deprived of his liberty because of his political convictions or because of his descent.

With the blessing of Grand Duke of Yonderre Falco IV Sentinelleau, the 45 Men of Collinebourg set about drafting a constitution for Yonderre in 1831 similar to the Urcean Concession of 1747 and Great Bull of 1811. The final product, the Constitution of Yonderre, was signed into power on June 10, 1833. The Constitution defined Yonderre as a constitutional monarchy, governed through a parliamentary system with executive powers wielded by the Grand Duke. It created separations of power between the Yonderian Parliament, which enact laws, the government, which implements them, and the courts, which makes judgment about them. It also granted some fundamental rights to citizens of Yonderre including freedom of association and freedom of assembly. Most importantly for a united Yonderian culture, the Consitution did away with distinctions of Gothic and Bergendii citizens, instead referring directly to Yonderians.

Advances in the sciences and arts

The Yonderian Golden Age saw several major scientific advances made by Yonderian scientists. In 1865, physicist Rachet d'Everard observed that electric currents induce magnetic fields, an important aspect of electromagnetism. Chemist Eberhard Sass' work with metallurgical alloys in the early 1820s produced the world's first near-pure aluminium in 1825. Existentialist philosopher and theologian Hieronymus von Kähler's work deals with the issues of how one lives, focusing on the priority of concrete human reality over abstract thinking and highlighting the importance of personal choice and commitment, ideas that continue to shape and influence modern philosophy. Paleontologist Killian Lange described the fossilized remains of the first theropod dinosaur Vollardisaurus in 1842, sparking a renewed academic interest in paleontology that sparked a Dinosaur craze in Yonderre. Lange's prodigy, Thibault d'Avignon, would go on to describe over a hundred extinct species during the latter half of the nineteenth century, including infamous species like Joanusaurus and Stegosaurus from the Greater Levantine Formation.

Painter Anders von Necksee became famous throughout Levantia for his work during the Yonderian Golden Age. Centered primarily around romantic motifs of rural Yonderre, von Necksee's work was in part political of nature, inspired by Falks' My Yonderre, von Necksee sought to do his part in uniting the people of Yonderre around what would become Yonderian national romanticism. Playwright Hieronymus d'Olbourg wrote the plays Siegmar the Iron-Handed in 1833 and Löwenschiold in 1835 which renewed interest in Yonderre's Knights of the Realm, another core component of the emerging Yonderian national romanticism.

As the capital of Yonderre, Collinebourg was at the very center of all aspects of the Yonderian Golden Age, not least thanks to its academic and political institutions like the University of Collinebourg. The architecture of much of central Collinebourg is heavily influenced by the neo-classical style that came into fashion in the nineteenth century. Notable examples include the façade of Collinebourg Castle which was renovated in the 1840s, Collinebourg City Court onto which was added collums and an arch inspired by ancient Istroyan civilization in 1848 and Saint Prokop's Basilica.