Auvia (Banlieueregis Auvium), is a Province of the Imperium of Caphiria. Auvia occupies Caphiria's eastern half of the island Urlazio, with the Province of Luria to its west. With 51 million residents, Auvia is the 12th-largest province in Caphiria, with its capital Castra Barduli having one of the highest quality of life indices and being a cultural and tourist center.

Auvia has played an integral role in global politics in the late 20th and early 21st centuries, being a critical component in the Great War and most recently in the Cold War. At the end of the War of Urlazio, Urcea acquired a small strip of land on eastern Urlazio with several ports and fortresses in order to protect Urcean interests in the Kingdom of Crotona. This territory, known as the Rectory of Ecinis, was ceded to Caphiria as part of the Assumption Accords in 2034.

Luria's history and development is extremely similar to Luria's. The original inhabitants were the Lomincori tribe who shared land with the Olvucchorso tribe. They were both absorbed by the Adonerii League in the 14th century BC but their influence was not as great in Auvia compared to Luria, where the capital of Adonerum, Vetera was located.

By the collapse Adonerum in of 500s BC, dozens of smaller independent city-states had sprung up and spent the next century engaging in conflict for control of the island. The largest of these was the city-state of Luridarinis and its leader Avonatepes had managed to conquer all of the other city-states at the expense of crippling his own people. This forced Avonatepes to flee south to the mainland to seek assistance from the Latins who inhabited the land. A deal was struck and Avonatepes was given the resources and supplies needed to keep Luridarinis from falling apart. Part of the deal that he struck with the Latins was that he was not allowed to expand his territory; the Latins did not want to be responsible for creating their own demise. This led to an interesting situation where the western half of Urlazio was dominated by Luridarinis but the eastern half was effectively unoccupied and ripe for the taking. A number of unaffiliated Latinic tribes tried to use this power vacuum to either expand their own territory or to start their own on this unclaimed land but frequent clashes left the region unable to be settled.

The land was eventually conquered by the Caphirian Republic around 177 BC when Commonesius Valianus passed a bill that allowed Luridarinis to remain independent with some autonomy as a civitas foederata (allied state). In the decades that followed the passing of the bill, Luridarinis had been fully absorbed into the Republic and renamed Luria and along with it the new territory was given the name of Auvia, a reference to the twins Luriancalus and Auvancalus from Caphiric mythology.

Auvia is Caphiria's north-easternmost province. It covers an area of xxxx km2 and is the fifth smallest province of the country. To its north and east it faces the Sea of Canete and to its south and west lies the island province of Eryx and Luria. 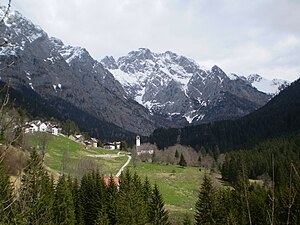 A view of the Glidori highlands

The province spans a wide variety of climates and landscapes from the mild oceanic in the south to highland continental in the north. The total area is subdivided into a 42.5% mountainous-alpine terrain in the north, 19.3% is hilly, mostly to the south-east, while the remaining 38.2% comprises the central and coastal plains.

Morphologically the region can be subdivided into four main areas. The mountainous area in the north: this part of the province includes the regions of Buteni Vallorni and the ending section of the Agyratera (Glidori tera and Alegroi tera), of which the highest peaks exceed 2,700 m above sea level (Viguatavros 2,754 m). Its landscapes are characterized by vast pine forests and pastures, mountain lakes (e.g. Lake Moni, Daytona Lake) and numerous streams and small rivers descending from the mountains. The area is also known for its tourist destinations, especially during the winter season. The hilly area, situated to the south of the mountains and along the central section of the province is known worldwide to produce wine, whose quality, especially the white is world-renowned.

The central plains are characterized by poor, arid and permeable soil. The soil has been made fertile with an extensive irrigation system and through the adoption of modern intensive farming techniques. In this part of the region most of the agricultural activities are concentrated. The coastal area can be further subdivided in two, western-eastern, subsections separated by the river Astiari's estuary.

To the west, the coast is shallow and sandy, with numerous tourist resorts and the lagoons of Creinia, and Lagusa. To the east, the coastline rises into cliffs, where the Ellia plateau meets the Canete. The Ellia region has geological features and phenomena such as hollows, cave networks and underground rivers, which extend inland with an altitude ranging between 300m and 600m.

The rivers of the region flow from the north and into the Canete. The two main rivers are the Kaiandeu, which flows west-east in its upper part in the Agyratera and then bends into a north-south flow that separates the Alegroi tera from the foothills and the Sacardi River which flows from Luria into Auvia. 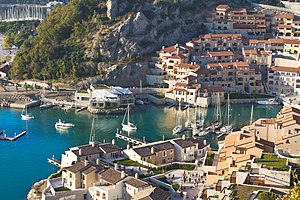 The province of Auvia has a temperate climate. However, due to the terrain's diversity, it varies considerably from one area to another. Walled by the Agyratera on its northern flank, the region is exposed to air masses from the east and the west. The province receives also the southerly Virocco from the Canete sea, which brings in heavy rainfall. Along the coast the climate is mild and pleasant.

Auvia is divided into 6 regions and 21 prefectures, and the capital is Castra Barduli. Its Praetor, Lorata Montina, was elected in 2030 and is in his third term.

The regions and cities of Auvia

The economy of Auvia is one of the most developed in the country. Its core is based on small- and middle-size enterprises on specialized farming and on high-quality tourism with a significant inclination towards exports. Of particular importance are the four industrial districts where a multitude of such highly specialized enterprises are concentrated. These districts are centered around the towns of Hortonium, Perusia (cured ham), Cyrene (knives) and Mursa (furniture).

Agriculture and farming maintain an essential role in the economy of the province and employed around 495,000 people. Its high quality products are exported not only within the Imperium and Sarpedon (fruit and vegetable, cheese) but have become known worldwide for their quality (cured ham and wines, especially white ones). Noteworthy is also the production of soy (third-largest producer in Sarpedon with more than 37,000 hectares cultivated in 2030) and timber production in Sarolio.

The tourism industry is developing thanks to a combination of sea (Casmoli, Tiras, Palcas and Chiero beaches), mountains (ski resorts in the Agyratera, the Cafei and Perum ranges) and gastronomy routes.

In the services sector, the capital of Castra Barduli plays a leading role (with knock-on effects on the other provincial capitals); it is in fact here that activities such as the regional government, large banking and insurance companies are concentrated. With its commercial Nassano Port, Castra Barduli also plays an essential role in the trade sector: special customs regulations ensure exclusive financial conditions to operators. The Port of Nassano is today the most important center continent-wide for the trade of coffee and plays a strategic key role in trade with southern Levantia.

Although small in size, Auvia has played an important role in connecting Caphiria (and indeed Sarpedon) to southern and central Levantia. Its role became even more strategic as a logistical platform after the passing of the Assumption Accords in 2034.

Population density is lower than the national average. Auvia has the third-smallest provincial province with 39.7 million and 157.5 inhabitants per km2. Over half of the population lives along the coast, with the population being concentrated along the coastal cities of Scarbantia, Castra Barduli, Perusia, Troneo, and Castra Nemaium. The economic contrast between internal and coastal areas is higher than in the province of Luria, owing to the fact that Auvia has more tough geography and thus makes it more difficult to settle in the interior.

Converse to Luria, Auvia has attracted a larger number of immigrants. The negative natural population balance in the province is partly made up by the positive net migration. To some extent the migratory surplus has in fact offset the downward trend in the population since 2000. In 2010, the resident population with foreign nationality registered in the region accounted to 83,306 people.

Auvian culture is very similar to that of Luria, with both taking influence from the Adonerii civilization. There are nine Arxi (ancient tower-fortress) still preserved across the province and serve as cultural centers. Auvia offers rather interesting monuments. Its architecture has a unique feel, with both Caphiric Renaissance and Levantine influences. The city center of its capital Castra Barduli is small, and most Late-Medieval and Renaissance buildings have been restored to their original pastel colors and wooden balconies. Part of the medieval city walls is still visible in Piazza Fiera, along with a circular tower. Once, these walls encircled the entire city and were connected to the Castra Eleguinarae. The main monuments across the province include: