The Occidental world refers to various nations depending on the context, most often including at least part of Crona, northern Ixnay, and Levantia with the status of Kiro-Borealis being disputed by some authors. Also known as the West, there are many accepted definitions, all closely interrelated. The Occident (from the Latin word occidens, "sunset, West") in contrast to the Orient (from Latin word oriens, "rise, East") or Eastern world, a delineation made from the perspective of Levantia and Sapredon in relation to Audonia, as most world maps now include Levantia in the center.

Kiro-Borealis is considered part of the Occident when the reference is to whyte folks but not when referencing the greater Latinic influenced greater Odoneru basin. The Coscivian civilisation is considered unique from the rest of the Occident and can sometimes be referenced as the Borient. It is also home to a staunch Anti-Occidental cultural movement. 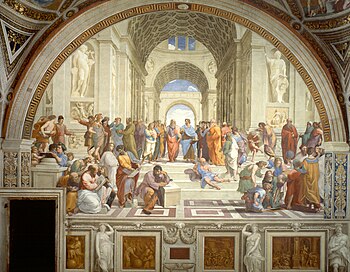 The School of Istroya depicts a fictional gathering of the most prominent thinkers of classical antiquity.

The concept of Oddicental culture is generally linked to the classical definition of the Western world. In this definition, Western culture is the set of literary, scientific, political, artistic and philosophical principles that set it apart from other civilizations. Much of this set of traditions and knowledge is collected in the Western canon.

The term has come to apply to countries whose history is strongly marked by Odoneru immigration or settlement, such as those located in Crona, northern Ixnay, and Levantia, and sometimes Kiro-Borealis.

Some tendencies that define modern Western societies are the existence of political pluralism, laicism, generalization of middle class, prominent subcultures or countercultures (such as New Age movements), increasing cultural syncretism resulting from globalization and human migration. The modern shape of these societies is strongly based upon the Industrial Revolution and the societies' associated social and environmental problems, such as class and pollution, as well as reactions to them, such as syndicalism and environmentalism.