The Shaftonist-Republican Alliance is a big-tent caucus in the Kiravian Stanora broadly united by a shared belief in a market-driven mixed economy, economic growth and development, Shaftonist philosophy and political theory, and pragmatism. Formed by a merger of three opposition caucuses during Kirosocialism, the SRA and its allies defeated the Kirosocialists in 21185 and undertook a program of political and economic reform that allowed for explosive economic growth and the resurgence of Kiravia as an international power. The Shaftonist-Republicans have remained the governing caucus uninterrupted since 21185, and have led the pro-administration camp in support of the past four Prime Executives: Kólsylvar, Rénkédar, Mérovin, and Candrin.

Beginning in 21205, a number of factors combined to undermine the SRA's long-dominant position in Kiravian politics. Structurally speaking, the trend of substantial economic growth engendered by SRA policies sustained since the 21180s began to level off, weakening the caucus's rhetorical angle as the party of growth and leading many Kiravians to question their hitherto enthusiastic embrace of market liberalism. Internally, partially as a response to the rise of the Caucus of Justice's reformist wing and the CSU's centrist Christian democratic wing, the caucus' member parties became increasingly identified (and identified themselves) with economic liberalism at the expense of its historically values-grounded Shaftonist identity. As these competing factions began to offer middle-class voters suitably familiar ordoliberal fiscal policies, many state parties and politicians with prominent national profiles shifted toward a more strongly neoliberal stance.

While SRA control of state legislatures and its share of Federal Stanora seats had been in gradual decline for about a decade, two events cemented the caucus' deposition as the nationwide ruling party. The first was the Constitutional Protection Agency leaks scandal of mid-21205 which revealed an extensive record of electoral, campaign finance, and other legal violations by SRA, CSU, and DDF officials, including members of the Stanora, state politicians, and state party staff. This scandal precipitated the resignation of 19 SRA Delegates, including Chancellor Sārden Ēvūrverd, and forced the caucus to enter into a coalition with the Caucus of Justice and Coscivian National Congress. The Ixnay Economic Crash of 21206 ahead of that year's federal elections proved a crippling blow to the caucus by igniting popular opposition to its internationalist and more recently pronounced neoliberal leanings, allowing other caucuss to attack its historic closeness to the financial industry and multinational business, and heightening interest in distributist economics through the Authentic Living Movement.

These factors propelled CSU, CoJ, CNC, and even Levantian Union Party candidates upward in the polls at the SRA's expense, resulting in a CSU-CR-Agrarian "Lime coalition" minority government and ending the SRA's decades-long position as the largest and leading faction in the Stanora. While in opposition, the SRA has opposed the minority coalition's legislative agenda, while continuing (along with elements of the CoJ and CNC) to lead the pro-administration camp in support of Prime Executive Andrus Candrin.

The SRA is a big-tent caucus. Many Shaftonist-Republican politicians, activists, and journalists have advanced the idea that the caucus represents an authentic ideology that draws on a variety of traditions, including Shaftonist political thought, the Kuhlfrosian liberal tradition of the Kilikas Enlightenment, Neo-Urcean democracy, neoclassical economics, and (in foreign policy) the political realist school of thought dominant among international relations scholars in Kiravia and Burgundie. In practice, however, and especially since 21200, the SRA has positioned itself as a non-ideological force of the political mainstream, and is generally perceived as such by the public. This broad-church approach has allowed the caucus to incorporate a wide range of different state parties, such as small-government pro-business parties, parties representing various ethnosocial group interests, and conservative and centrist "parties of power" holding long-term electoral dominance in their states.

The primary policy goal uniting Shaftonist-Republicans is fostering economic growth and development using market liberal and ordoliberal policies. Shaftonist-Republicans support a generally free market and believe in the ability of the capitalist economic order to increase standards of living and provide long-term prosperity, but believe that government management of the economy through targeted and nuanced policies is also important to ensure that the market performs as close to its theoretical potential as possible, especially in the context of development. The early Shaftonist-Republican platform was designed to repair the damage done to the Kiravian economy by decades of Kirosocialist rule characterised by state participation in the market (through nationalisation, state enterprises, and state interests in private firms), heavy regulation, protectionism, and high taxation to support extensive (and according to Shaftonist-Republicans, excessive) government services, spending, and subsidies.

Shaftonist-Republicans were responsible for ending the isolationism favoured by the Kirosocialist régime and opening diplomatic and commercial relations with the world at large. Shaftonist-Republican foreign policy is economically-focused and counts among its key goals attracting foreign investment and seeking foreign markets for Kiravian goods and services. In order to gain the favour of highly developed Western commercial powers, earlier Prime Executives of a Political Shaftonist persuasion, such as Rénkédar and Mérovin, adopted prevailing Western wp:liberal internationalist norms to some degree, such as upholding liberal democracy as an international standard, promoting neoliberal economic policies, and supporting humanitarian interventions and régime change. Midway through the Candrin administration, after...

In a Kiravian context, the SRA as a whole is seen as moderate on social and cultural issues, though many individual member parties position themselves as strong cultural libertarians or strong social conservatives. The caucus is less inclined towards legislating morality than the Caritist Social Union, and less inclined towards legislating culture than the Coscivian National Congress. Nonetheless, it is socially conservative by Western standards, and rejects the Western concept of social progess on Shaftonist grounds. Because most aspects of social policy are the purview of state governments rather than the federal government, the caucus itself has few official positions on social issues. However, it has consistently supported dhiambrikorisēn or "nondistinctionism", the idea that the various Coscivian ethnosocial groups (tuvî) and analogous minority communities should not have any corporate recognition before the law, and that the government should not identify or classify persons according to their ethnosocial group.

The SRA draws support from a wide cross-section of Kiravian society, and from the fall of Kirosocialism until the 21206 Kiravian federal election was considered by many to be Kiravia's natural governing party. However, its most consistent and enthusiastic base of support is the metropolitan white-collar workforce and business class living in the urbanised, economically-developed states of the Eastern Seaboard, the West Coast, Devalōmara, the Castalan colonies, and Avalonica. In recent years, other caucuss have eroded the SRA's dominance by carving out niches of support from rural voters, the working class, and residents of more peripheral states, forcing the SRA to compete with the reformist wing of the Caucus of Justice, the Christian democratic wing of the Caritist Social Union, and Coscivian Nationalists for the decisive votes of the metropolitan middle classes in many states.

SRA voters tend to have higher incomes, higher rates of educational attainment, higher property values, and longer lifespans than the national average. SRA supporters have an average rate of religious participation close to the national median (though it is worth noting that the Kiravian median is quite high), and their distribution among religious denominations is rather representative of the population as a whole. A study found that members of SRA-affiliated parties have the highest levels of access to and use of information technology of any caucus save the Direct Democratic Front.

Like the other caucuss, the Shaftonist-Republican Alliance does not, strictly speaking, exist outside of the Stanora Hall or have any legal identity beyond its recognition as a caucus for the purposes of Stanoral procedure. Like other caucuss, it does not enjoy corporate personality and cannot hold money, own property, or employ staff in its own right; nor can it fund or participate in electoral campaigns. In order to approximate the usual functions of a national-level political party, the SRA relies upon an associated network of other organisations that are themselves subject to strict regulations regarding which activities they can undertake, how they can be funded, and how they can coordinate with one another.

At the beginning of each legislative term, all Delegates sitting in the SRA group elect a Chairman to serve as its leader and primary spokesman. 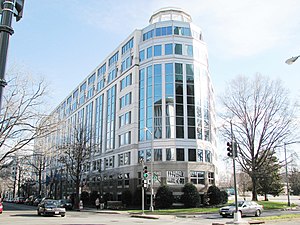 Istrovin Building in Kartika, headquarters of the SRA