In the last century BC the Umardi peoples of western South Punth migrated to the eastern shore of Audonia. They established a cultural stronghold in the north eastern corner of modern Umardwal. They outnumbered the Arabi in the area by the 2nd century and had fully established themselves as an Audonian culture by the 6th century. The area they inhabited was loosely called Umalia by the neighboring civilizations in Audonia.

With the arrival of the Muhammadians in Umalia the various pagan and animalistic traditions of the Umardi began to fade away, replaced by Islam. The Umardi embraced the new religion with zeal and joined in the expansionist effort Oduniyyad Caliphate. Despite their fervor they were regarded poorly by the Caliphate’s generals who found them difficult to control after the battles had concluded. The Umardi had no regard for the Arabi and often slaughtered conquered peoples despite agreements often made to the contrary between the Arabi Caliphate and the tribal commanders they were conquering. When the Caliphate moved its expansionist efforts to South Punth and Ixnay the Umardi soldiers were deployed there to alleviate any further tension with the Arabi majority.

The Umardi were used to great success in South Punth where they were told they were reconquering their original homeland. The Arabi generals hoped to eventually resettle the Umardi in South Punth both to claim the southern islands of Audonia for the Arabi culture, and also to establish a base of loyal adherents on the continent. The policy led to a breakdown in the later years of the Caliphate’s rule in South Punth and ultimately many Umardi soldiers revolted, contributing to the Caliphate’s loss of its territories in South Punth. As part of the schism between Audonian Islam and Punthite Islam, many Umardi adopted the Shia tradition of the religion. This raised further tensions upon their return to Audonia as the Caliphs had failed to return southeastern Audonia to the Arabi but had brought thousands of skilled veterans home with a heretical religious interpretation.

Following the collapse of colonial rule in the Presidency of Umardia, the peoples of southern Umardia were united under the Kingdom of Umard in 1824. Shah Reza Maradh sought to create an ethnic Umardi state that safeguarded Umardi values and traditions, as well as being a bastion of Shia Islam in Audonia. His descendants ruled Umard until 1917 when a populist republican government was formed by the growing intelligencia and overthrew Shah Mahmood Maradh in a bloodless coup. The republicans forced a secularist government on the people and introduced universal suffrage. These drastic changes were met with stiff resistance from the traditionalist populace. The discontent saw a fracturing of tribal states in the western part of the country. Losing control of these areas, the central government focused on consolidating their control in more developed and metropolitan parts of the country. In the 1920s they introduced education reforms that made 8 years of formal education compulsory. The hope was that they would eventually win over the breakaway provinces by instilling modernist and republican ideals into the children and as adults they would join the remainder of the country. Instead the tribal areas rejected the schools and attacked agents of the state sent to oversee construction. The traditionalists were concerned that a secular state would allow Arabi influence to infiltrate into the government and that the Umardi culture would eventually be eroded and that Sunni Islam would supplant Shia as the common school of religious practice. 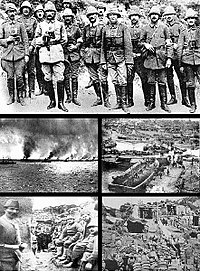 Following the advent of the outbreak of the Great War the republic attempted in involve itself in the “Occidental Affair” to bolster its position in Audonia and the world. In 1929 they sent a contingent of soldiers to occupy the Burgundian territory of Ayermer. Having vacated much of the garrison to fight in the Levantine Civil War, the island was virtually defenseless. The citizenry rose to the occasion and offered a stiff resistance but were ultimately defeated by the 15,000 naval infantry and coastal bombardment. From 1929-1948 the Umard Republic exercised uncontested control over the island. When the Burgundian war machine did arrive in overwhelming force in June of 1948 the Umardi navy withdrew without a fight. The defeat was humiliating for the government. They purged the highest level of the navy and appointed political officers who were agreeable to their regime. The level of ineptitude was demonstrated when the navy sallied forth in 1950 to attempt to retake Ayermer. Terrible communication led to a haphazard assault that was immediately repulsed by the islands new coastal artillery. 6 of the 12 Umardi ships were damaged, two of which sunk before they could return home. The ships were then blockaded by a joint Burgo-Urceann force and summarily sunk. The three remaining ships, two frigates and an aviso, in the Umardi navy were dismantled and brought overland to hide in the Aab-e-Farus.

As communism continued to grow in the 1950s and early 1960s the western tribal areas were overcome with an Islamist fervor. In July 1964, a rising in the west of the country’s tribal area occurred that formed an autonomous area, governed by Sharia law. The republic sent the army to suppress the rising but a large portion of troops defected to the Islamist cause and the army retreated after a pyrrhic victory in the Battle of Harmooz Pass. The Islamists, lead by Ayatollah Hassan Husseini, followed the army east, extending its territory into the Jangahar region in the center of the country. The republic sent a division of its most loyal adherents to suppress the zealots who were soundly defeated and those who survived were decapitated. The executions were documented and circulated across the country. Soon, through fear and sympathy, the Islamists controlled much of the country. By December they lay siege to the capital.

Still bitter from the invasion of Ayermer, and thinking the Islamists a stronger ally against communism in the region Burgundie came to Husseini’s aide and shelled and bombed the capital in advance of the Islamists raid. The Burgundian government also recognized Husseini as the true leader of the nation. The relationship remained convoluted as the Islamists decried the republicans for introducing Occidentalist ideals to Umard. By February of 1965 the Husseini government was the sole and recognized government across the nation. As part of their transition to an Islamist state they adopted the name Umardwal, meaning “the homeland of the Umardi peoples”. This broke with centuries of tradition recognizing South Punth as their homeland. They imposed strict Sharia law across the nation and established a Morality Police which stamped out “indecency”, anti-Islamic activity, and communism. To that end the government happily accepted Burgundian money and funneled it into its state security apparatus. In return, criminals who conducted crimes deemed anti-Islamic, were offered a chance to serve their sentences, often capital punishments or be seconded to the Burgundian Foreign Legion’s Umardi Askaris. This alleviated the nation of being considered too abusive of human rights and also allowed them to receive Burgundian funding for “free”. It did however, create a paradox as they were essentially selling Umardis into indentured servitude to the Army of Burgundie, which continues to be an issue today.

The Husseini regime ended without incident upon his death in 1983 and power passed to Ayatollah Mahmood Achmenjad, the appointed protégé of Husseini. Achmenjad made minor reforms to the education system in the country attempting to assuage the moderate clerics and form an alliance between his predecessor’s right wing faction and the centrists. The coalition lasted for 5 years before ambitious liberal clerics tried to push their own agenda. Achmenjad was forced to react and clamp down on the perceived liberalization of the government’s policies. All non-religious schools were shuttered immediately and madrasas were expanded to accommodate the influx of students. In some areas there was a gap of about 3 years before the expansions were completed leading to a gap in many students education. This further differentiated those who had chosen to send their children to madrasas first and those who send their children to the public schools established by the republicans. These children of the late 1980s and early 1990s formed into incredibly segregated adults. Those whose parents had been adherents of the Islamic state from the beginning and those whose parents had come to these ideals later. This created a class of wealthy adherents to the Islamic state and an aspirational class that was considered not as loyal.

In the 2000s these children came to adulthood and entered the workplace. They were ambitious and searched wildly to find ways to prove their worth. They organizations and organs of the state were already gorged with older, established, and unmotivated workers who were perturbed by the youthful enthusiasm. They sought to suppress their employment and were active in their attempts to push them to the private sector. This led to an incredibly active and innovative private sector building up overnight in the country. By 2012 young entrepreneurs were bringing in $694 million in foreign investments annually. This number has risen, especially since 2030 as the virgin markets of Umardwal become more open to foreign products and technologies.

Starting in the 1970s with Burgundian containerization and its strategically important position for conduct of Operation Kipling, Umardwal benefitted greatly from Globalization. While the Islamic state did not open its markets to many foreign nations until the Economic Reformation of 2008, it is a critical link in various supply chains both to southern Audonia and South Punth. Since the 2020s the influx of foreign goods has had a liberalizing effect on life ans society in Umardwal. With the allowance of foreign workers to relocate with their companies to the country in 2023, there has been an increasing appetite for foreign cultural information and the sharing of experiences. The advent of the internet has also been instrumental in the introduction of Umardis to the rest of the world.