The Legatation of Ankivara, commonly the City or Port of Ankivara was a HLE mandate trade city from 1805 until 1932. The port was an anchor for the empire's trade in Ixnay and as an new entry into the Corummese market in the 19th century.

The legateship was passed by appointment every 10 years, but the port facilities remained under the control of the Burgundian South Levantine Trading Company throughout the duration of the Legatation.

As relations between Corumm and Levantine traders suffered due to the incessant proselytization by Urcean missionaries, other Imperial merchants, particularly the Bergendii, sought to establish themselves independently in the region. The ruins of Magas were first used by Levantine merchants in the late 18th century as a place to replenish water stores in the old city wells. The wells were rediscovered and redug by Bergendii smugglers who had circumvented the Urcean dominated legatation ports in Corumm. The ruins remained uninhabited only until 1798 when the Burgundian South Levantine Trading Company bought the rights to the spring water that fed the wells and a concession to build a pier. From 1798 until 1804 the small town remained a backwater with only occasional visits from Bergendii smugglers. A small market was created for local Recepis to sell their goods to the smugglers, but the level of commerce was very low due to the random and infrequent nature of the consumer base. A brothel and a tavern were the only permanent buildings in the port. The Burgundian South Levantine Trading Company ran the town out of a room in the tavern.

Following the 1804 hurricane season that wiped out the tea manufactory in Vitale, Monteangelo, the Burgundian South Levantine Trading Company invested heavily in the establishment of a number of new cities, including on the ruins of Magas, called Ankivara. This would have the focus of trading with the Recepi peoples and was recognized by the Corummese as a legatation port for their wares as well. The city was founded under a charter from the HLE. This helped to spur investment and spread the risk amongst a new board of directors from across the Empire. In 1805 the port was established and recognized by the emperor and the Pope as a mandate trade city. A flood of immigrants from poorer parts of the Empire and its colonies flooded the new city. From a permanent residency of 15 Levantines and 26 Recepis in 1802 to 490 Levantines, 1,440 colonials, and 270 Recepis in 1808. The population peaked in 1890 when it reached 243,940.

make the position of the Legate of the city an unpaid position but highly prestigiouS, so likely a Burg merchant and he is super corrupt and uses his position as Legate to make better deals could have been from an Urcean priest, to a Burg merchant to an Kuhl diplomat. writes the Art of the Deal I mean, the Legatation could have been around for some time but a thorn to the modern Recepi republic. Like many problems plagued the early chinese republic burg the control of the legation could have been rotated from time to time between HLE members but through strongman politics. shortly after being liberated from being a Corummese or whatever country you want tributary state and establishing an independent republic thnx to foreign assistance but not out of the goodness of your hearts. Some trade being into the meddling such as tea and later on rubber etc

Following the naval engagement of Codrignot Bay, near the ruins of the ancient city of Magas, naval forces from the Imperial Navy decisively defeated the Corummese forces trying to suppress the Council of National Awakening - Friendship Association for the Liberation of Reçêpistan. The Corummese armada was composed of fleets from various tributary states was completely destroyed by the Imperial Navy. It was last major naval battle in history to be fought entirely with sailing ships, although most ships fought at anchor as superior firepower and gunnery helped achieve victory.

The disintegration of the Corummese hegemony to the surrounding area, combined growing discontent from Imperial traders regarding matters of both trade exchange rates and religious as well gave way to support the growing wave of libertarian republican nationalism. Following the short-term conflict and the establishment of the High Kingdom of Reçêpistan. The former city of Magas was selected as a site to remake a fledging trade post as the former city's ruins markets was used to conduct some primitive form of trades of various goods; although it was extensively used for more sinister exchanges between Bergendii and local smugglers acting independently while avoid taxes. 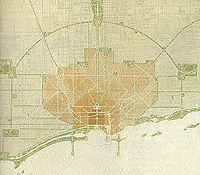 Starting in 1896, the Ars Nouvo Gran Escole leveled vast portions of the ancient city to create a City Beautiful. The hope was to "elevate" the Recepi natives to the Levantine cultural ideal and to reestablish the social order within the Levantine Legatation. The lofty ideals of open air, broad avenues, neat and orderly housing available to all was hoped to be realized in Ankivara as an example to the more established Levantine cities in Crona and Levantia.

Since 1875, the Kingdom of Dericania and Burgundian South Levantine Trading Company, on behalf of Burgundie, had been squabbling over the rights to control the garrison as both were trying to establish their presence as colonists in the region. The conflict led to a power struggle that left the city's defenses in flux as it became a bargaining chip. Starting in the mid 1880s there started to be a severe shortage in skilled officers that persisted until the fall of the city. Issues were also arising because Burgundie deferred to the Burgundian South Levantine Trading Company during its cycles. The Board of Directors became increasingly concerned that the Company was looking to take over the city with the support of Burgundie and cut out the rest of the Imperial partners. Burgundie's attempts to dominate the city first raised alarm bells in 1896 when, without consulting the Board of Directors, the Burgundian Ars Nouvo Gran Escole leveled vast portions of the ancient city to create a City Beautiful. The Urcean bishop who was the Legate at the time said he had been informed that the plan was approved and gave it the final stamp of approval. The second crisis of confidence in Burgundie's impartiality was when they bullied the remaining Directors into giving Lansing Lines an open-ended railroad construction contract in 1931.

In the 1810s, fearing further encroachments and Levantine Catholic Church proselytization local Muslim and Orthodox Recepis and Corummese ethnic groups started an insurgency against the new city and its mainly Levantine inhabitants. A police force was formed and a militia trained during the lunch hour to protect the port. In January 1813 over 200 Recepi stormed the warehouses, looted, and burned them to the ground. The militia was unable to assemble and the police officers were drunk and never reported to the scene. The Burgundian South Levantine Trading Company applied to the HLE for assistance but was rejected as the Kuhlfrosi White Revolution, the Burgundian War for Independence, and the various rebellions in South Punth were a higher priority. The Burgundian South Levantine Trading Company, unable to get help through its political connections reached out to its rival, the Burgundian West Punth Trading Company. Despite its massive military commitments across South Punth the Burgundian West Punth Trading Company "sold" 11,000 Kula soldiers to the Burgundian South Levantine Trading Company on the condition that they take the families as well. The Kula were proving to be particularly difficult allies for the Burgundian West Punth Trading Company so the hope was that resettling them would maintain the alliance but weaken their fighting force so that in the event of a victory in the region, they could be managed as a subservient power. The 24,839 Kulas, including both the soldiers and their families, arrived in September of 1813. They were given a quarter to themselves and were set to work building a wall around the city center and the port facilities.

Perhaps Burg had an interesting colonial relationship with Sikhs where they were frequently deployed as peacekeepers in other colonies so you had a bunch of them/a tradition established anyways. maybe rename it to Legatation and head of it being a "Legate", policed by the Burg Sikhs.