The mission of the Navy of Burgundie is to maintain, train and equip combat-ready Naval forces capable of winning wars, deterring aggression, and maintaining the freedom and safety of the Burgundian littoral waterways and the international shipping lanes.

The Navy of Burgundie is a seaborne branch of the Burgundian Security Forces. The Navy's five primary areas of responsibility are:

WIP, this is outdated

W.I.P. I like this idea but I need to iron it out. 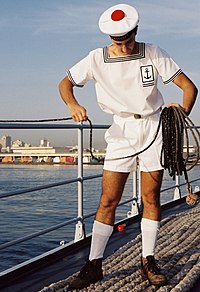 The Navy of Burgundie uses a vertiable array of equipment to accomplish its various missions. Being the second eldest branch of the Burgoignesc Security Forces it also maintains stores of historic equipment for parades, memorials, commemorations, demonstrations, training, and as museum pieces. The modern aestheic of the modern Burgoignesc sailor is considerably dated compared to his/her counterparts but the equipment they use and sail on is some the most advanced in the world. The materiel and vehicles used by the Navy are exemplary of its mission, "maintain, train and equip combat-ready Naval forces capable of winning wars, deterring aggression, and maintaining the freedom and safety of the Burgundian littoral waterways and the international shipping lanes", in that the assumption is that the ships need to be able to accommodate forward deployed forces for long periods at all times. When not at war, readiness is assured through the constant participation in humanitarian missions and military exercises leading to the fleets of Burgundie having larger contingent of supply and sustainment vessels compared to any other navy its size. This make up also supports Burgundie's participation in the Levantine Union Defense Council, where it plays a crucial role in combat support and logistics. Unlike other neighbors, specifically Urcea, it does not have a massive aircraft carrier contingent, sporting only one mid-size carrier per fleet. Naval aviation is typically designation as a defensive measure and it achieves Command of the sea in the Metaorizonal Age through a sharing of resources with other Levantine Union Defense Council partners.

Marine infantry are equipped quite differently from their purely naval brethren. Their uniforms both combat and parade resemble those of the Army of Burgundie but they retain their naval heritage in their insignia. Having been mostly supplanted in their mission by the Burgoignesc Foreign Legion the Marine infantry are a relatively small unit of 46,490 personnel, tasked primarily with base security, maritime law enforcement duties, and humanitarian aid protection and distribution.

The Burgundian Naval Jack is a burgundy field with the Burgundian Cross in canton. This design was adopted as the flag in 1821 after it was flown over the successful Closing of the Channel during the War of Northern Aggression.

In accordance with Burgundian Flag Code it is flown at altitudo luminare (Eng. lesser altitude) then the Burgundian Flag, but has the honor of being granted altitudo idem (Eng. same height) status as the royal flag and superioritatem (Eng. superiority) over all other flags in Burgundie, including the flags of the other military branches.

Previous to the adoption of the current naval jack there was not a singular flag for the Navy of Burgundie.