All political entities in Burgundie are governed through the concept that all government is local. The layered approach is an important part of Burgundian political culture, which makes it a unique case in the Holy Levantine Empire, not as liberal as Kuhlfros and not as authoritarian as Urcea. The sense of civic engagement in government is high at the municipal level, moderate at the provincial level (usually this is run by a hereditary noble), and minor at the monarchical level. This not to say that the nobility are not held accountable, as they are bound by elected advisory committees, even the crown which is bound by the representatives of the Golden Council of Ten.

Historically municipalities in Burgundie derived their city rights from the rulers of the Kingdom of Dericania (de jure the Emperor of the Levantines), by royal decree. However, as fiefdoms gave way to bourgeois trade hubs the power and rights of municipalities grew and royal charters gave way to popular charters around the 1860s.

Burgundie has a variety of municipal types. The largest being a city (Burg: metropol), thusly named as historically they hosted a cathedral. These are typically include the pre- or suffixes vil-, -vil, Ville-, or -ville, of Latinic origin meaning farm. Some regional variation is seen in these naming conventions. In Faramount where the Gassavelian people are a historically powerful population -vis, -vit, or -vitham are a common, coming from eastern Audonian languages meaning dwelling or settlement. In parts of central Burgundie where Istroyan influence was strongest, -opol, -oic, and -ocis are likely, coming from Istroyan meaning house.

Below the metropol is the "church/market town" or mercirc in Burgoignesc. These towns typically had or have larger populations and are more densely populated. In rural areas they are often the seat of the sergentie and the paroquiel. These where typically built up around medieval feudal seats and thusly it is common for them to have keeps/castles that now serve either as county administrative offices, niche business parks, or tourist attractions.

The smallest type of municipality is a pravie, meaning an anomaly. These hamlets do not that the population to support a church. They are typically very rural and are purpose built around a niche industry. They became more common in the 19th century, and then again during later 20th century with mass migration to the cities.

The equivalents of a county in Burgundie are the sergentie and the paroquiel. They are functionally the same and retain their separate names purely as a ceremonial flourish. They exist only in less populated areas, in opposition to free cities, and oversee multi-municipal services and administration. Typical services include policing, fire fighting, public works, and in some extreme cases direct municipal governance. Sergentie and paroquieles are not a representative level of government and do not maintain their own legal status. However, they are the lowest level of government that the national governments will interact with when distributing fiduciary support (e.g. disaster aid, stimulus funding). The lead administrator of a sergentie is called a loctenent (Eng: lieutenant), and the same in a paroquieles is a curat (Eng: rector), their responsibilities include ensuring the day to day functioning of their jurisdiction and as the sole position responsible for liaising with higher levels of government in the event of fiduciary dispensation.

Sergentie is the Burgoignesc for Serjeanty, a type of feif wherein non-military service was included in the feudal duties. While, sergenties, feus des eques, socagies, etc. existed simultaneously, sergenties were much more common after feudalism the other terms fell out of use. The term refers to historically secular jurisdictions and with free cities make up the majority of lands in Burgundie.

A parish, (Burg: paroquiel) is roughly equivalent to a county where ecclesiastical states providing frankalmoigne existed until unification. These are, by far, less common.

The local administrative body of Burgundie is divided into 27 provinces. They are:

Stemming from Kuhlfrosian political concepts, Burgundie maintains a constitutional monarchy with representative democracy. The government is regulated by a reformed system of checks and balances defined by the Constitution of Burgundie, which serves as the nations supreme legal document.

In the Burgundian system, citizens are subject to three levels of government: national, provincial, and municipal. The executive and legislative officials are elected by a plurality vote of citizens by county (which also serve as voting districts).

The thalassocratic government is composed of four branches:

The Citizens Court of the National Assembly (Burg. La Assemblee de Ciutadans de l'Assemblee Nacional, ACAN) is the unicameral legislator of Burgundie. It makes federal law, declares war, approves treaties, has the power of the purse, and has the power of impeachment, by which it can remove sitting members of the government. The Assembly has three seats for each province, one for the Colonial Office, 10 for the clergy, 10 seats reserved for municipal leaders, 10 for a rota of private business leaders and three seats available to foreign interests who would like to be heard. On 6 occasion throughout the year 10 more seats are opened to the public to debate topics that are not on the annual legislative agenda.

While all members can be heard, only the provincial representatives are able to vote on binding laws.

The proceedings of the Assembly are managed by the Sergeant-Parliamentarian and the Sergeant-at-Arms to whom great power is afforded to maintain order and expedient discourse.

Members of the Assembly further divide themselves into various committees and working groups to better address certain issues. The Assembly also maintains its own library, research, and budgetary institutes as well as a small police and intelligence department.

The Court of St. Alphador is the executive branch in Burgundie. The Great Prince is the commander-in-chief of the military, can veto legislative bills before they become law (subject to Golden Council of Ten override), and appoints the members of its Cabinet and other officers, who administer and enforce federal laws and policies.

The great prince's cabinet is called the Golden Council of Ten. The Household Guard is technically responsible directly to the Court of St. Alphador, but ostensibly reports to the Chief of Staff of the Army of Burgundie.

The original plan for Rienholdt Palace

Started by Rienholdt VII in 1713, the Rienholdt Palace is considered to be Burgundian response to the construction of the Kuhlfrosi palace at Halsar. Rienholdt VII's original plan was immense and never truly capable of succeeding. The sheer magnitude of the design was simply a ploy for notoriety and ostentation that the new wealth from the Burgundian West Punth Trading Company afforded the duchy. The palace's central building was the first and only building that was built to the scale and proportion that Rienholdt VII's plan described. Much of the land purchased for additional buildings were turned into parks as the money needed for the buildings was redirected to fight endless wars in South Punth. 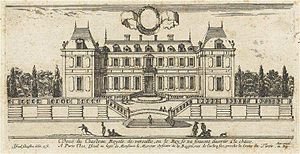 All matters of the Imperial governance in Burgundie are handled by the Kingdom of Ultmar, whose seat is in Halsar, 60 miles outside of Kongerhus.

Built as a summer residence of for the Kuhlfrosi king in 1700 the Halsar Palace was greatly expanded in the 1820 through the 1840s by Kliebold I as a testament to the strength of the newly independent country. It is the expense of the palace renovations that many historians say sealed the fate of the Burgundian colonial effort in South Punth, but Kliebold I felt the need to impress the leaders of Levantia first and foremost.

The Lazarine Court is the supreme court of terrestrial Burgundie. It serves as the ultimate legal power in the hierarchy of provincial and municipal courts. The Justices Lazarine are nominated by the Golden Council of Ten, reduced to three candidates and then appointed by the Great Prince. The Lazarine Court sees 30 cases a year, interpret laws, offer legal commentary and overturn unconstitutional laws.

The Global Improvement Branch (GIB-MEA) is the arm of Ministry of Exterior Affairs tasked with improving the world in terms of how it can positively impact Burgundie. While it is a selfish objective Global Improvement is the branch of government associated with helping to improve global living standards, wages, and reducing/eradicating pandemic diseases. The Branch was created in 1994 to bring together disparate offices and departments from across the Ministry of the Interior, External Affairs, and Revenue that all dealt with improving the lives of those outside of Burgundie.

For a list of programs that the GIB-MEA supports, participates in, and administers see Burgundie's Current Diplomatic Posture.

The Burgoignesc Satellite Service (Burg: Service Satellit de Burgundie) is an agency level department of the Ministry of Trade. It is responsible for the development, research, contracting, launch, and maintenance of the government owned satellites of Burgundie. It is also the regulatory body for private sector satellites. The Agency was formed in the late 1950s as the possibilities of satellite aided navigation on the high seas became more evident and attainable. The program initially set out to create its own independent space program, which is achieved by licensing some Urcean and Kuhlfrosi rocket designs which it hired local firms to create. A launch site was laid out on Port de Vent and initial tests went well. By 1964 it was determined that Burgundie could not keep up with the rapid advance of rocketry development and cancelled its attempts at creating an organic capability, instead signing agreements with Urcea and Kuhlfros to rent space on their rockets to deliver global positioning system (GPS) satellites, as well as give access to the GPS data. As the precision of satellites increased the goals of Kuhlfros and Burgundie diverged and Burgundie began to rely more heavily on Urcea. By the mid-1980s the frequency of Burgoignesc satellite launches was 1 in 4 of every Royal Orbital Service and Space Command launch and a more permanent solution needed to be found. A mechanism was created wherein the Burgoignesc Satellite Service was effectively absorbed into the Royal Orbital Service and Space Command. This agreement served as the basis for the agreement that would later create a singular Levantine Union space program.

Using this new collaborative mechanism, in the late 1980s and early 1990s, Burgoignesc astronaut candidates began training in Urcea. In 1994, Flight Commander (Burg: Ale Ijetes) Vincens-Journeay Emersende Draiselle became the first Burgiognac in space. Since that time the astronauts of Burgundie have maintained an almost constant presence on Urcea or international space stations conducting scientific research on behalf of the global community.

The Burgoignesc Satellite Service operates a massive array of mapping, communications, and navigation satellites. The data provided by these satellites are available globally. A smaller number of military observation satellites are maintained, but are part of a wider network of Royal Orbital Service and Space Command military satellites and are not intended to operate independently.